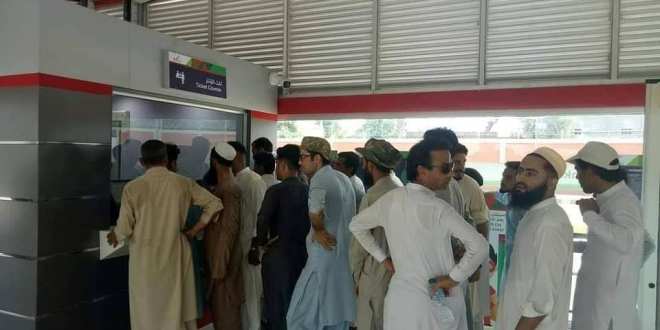 PESHAWAR: The process of distribution of free of cost Zu cards among the citizens has started ahead of the formal inauguration of the much-awaited Bus Rapid Transit (BRT) project in Peshawar.

Test drive on the BRT route is also underway. The Khyber Pakhtunkhwa government has decided to distribute 100,000 free of cost Zu cards among citizens before the inauguration of the mega project. The process of distribution of cards is underway and citizens are taking keen interest in it.

The Zu cards are being distributed at over a dozen stations including Hashtnagri, Gulbahar, Firdous of BRT Peshawar. Large queues of citizens are witnessed at some BRT stations. The process of cards distribution with top-up balance of Rs100 had started two days ago. The citizens will have to undergo biometric verification and load Rs100 top-up balance to get the card.

The TransPeshawar Company, which will manage the BRT operations, has offered the Zu card service on the basis of first come first served basis. One person can get only one card after biometric verification.

The KP government is expected to announce the date for the formal launch of BRT service on August 10.

Chief Minister’s Special Assistant for Information and Local Government Kamran Bangash said Chief Minister Mehmood Khan will chair a meeting about the formal inauguration of BRT on August 10 where he will be briefed about the project. After the meeting, the chief minister is expected to announce date for the inauguration. He said the provincial government wants to cover all issues before the launch of the service to avoid any complications.

Mr Bangash said buses were making test runs on the BRT corridor and he himself got a ride by using a Zu card from Gulbahar Station. To apply for the BRT Zu card, Mr Bangash remained in a queue amongst general public as he provided details and finger prints necessary for the card. After getting his Zu card, Kamran Bangash punched it at the station and took a ride in the bus.