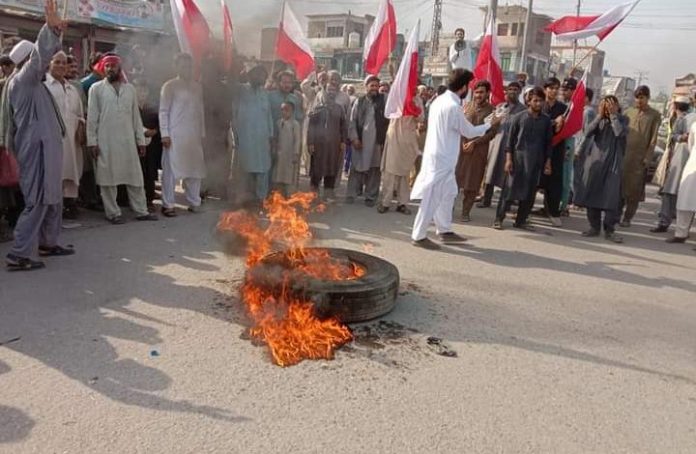 BARA: The activists of Pakistan Awami Inqilabi League on Tuesday held a protest demonstration against the alleged faulty survey of damaged houses of Akakhel tribe in Bara, Khyber tribal district.

The protesters gathered at Khyber Chowk of Bara Bazaar, burnt tyres and blocked the road for all kinds of traffic. The Inqilabi League president Attaullah Afridi said while addressing the protesters that the deputy commissioner and local member of Khyber Pakhtunkhwa Assembly were obliging favourites in the survey of damaged houses which is unacceptable for local genuine affectees. He alleged that the survey team is being pressurized to benefit the favourite people at the cost of real affectees of Akakhel tribe.

Attaullah Afridi demanded suspension of the present survey team immediately and holding of a survey on transparent basis. He said an impartial survey team must be formed in the area for damage assessment which could compensate the real affectees. He said the people of Akakhel tribe have offered countless sacrifices for peace and security in the region and they suffered a lot during militancy and military operations and suffered massive damages. He said it is time now to compensate the tribesmen for their sacrifices. However, he alleged, some influential people were misguiding the survey team and interfering in its work due to which it is feared that the real affectees will remain deprived of compensation to benefit the favourites.

The protesting tribesmen also alleged that influential people were trying to bribe the survey team for including their names into the list of affected people. They demanded the government to take notice of the irregularities in the damage assessment process and make sure that the compensation reaches the deserving people.

Meanwhile, Asmatullah Afridi, another leader of Inqilabi League, said the security forces held talks with them and assured that the concerns of the Akakhel tribe will be addressed. He said the authorities have assured them that they will take action if any anomaly was found in the survey process.

The protesters ended their agitation after Asmatullah Afridi’s announcement. They hoped that action will be taken against elements trying to deprive the affected people from compensation.