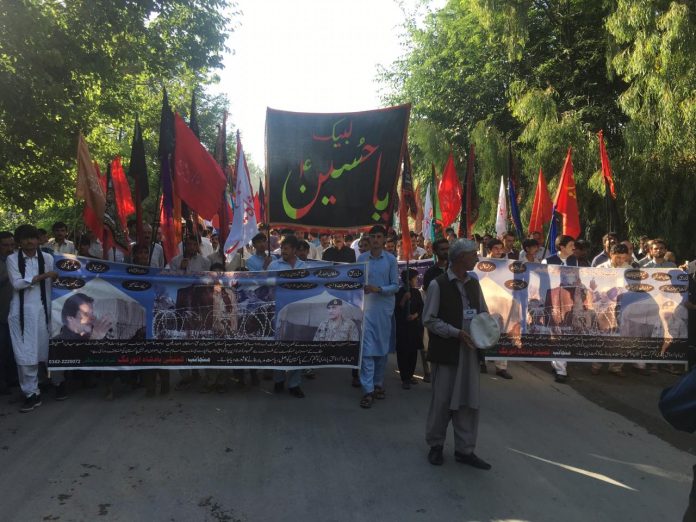 PESHAWAR: Hundreds of people protested against the government for blocking entry to the shrine of Mir Syed Anwar Shah Mian in Kalaya, Orakzai tribal district on Friday.

They slam authorities for not paying heed to protestors of Hangu and Orakzai district asking for entry to the shrine. The protesters asked Prime Minister and Chief of Army staff Qamar Javed Bajwa to intervene and resolve the issue and allow them to pay their devotion to their spiritual leader.

They said that due to the sacrifices of tribal people and security forces, peace has been restored in the area, therefore, they should now be allowed the freedom to visit the shrine as well as make necessary renovation and reconstruction. The protestors warned the government that of the doors of the shrine was not opened; they will spread their protestors to other parts of the country.

On June 12, a grand the Jirga of Kurram tribal elders in Kalaya asked the government to open the shrine of Mir Sayyed Anwar Shah Sayd Mian for devotees and sought permission to renovate the building of the shrine. The Jirga formed a 40 member committee to discuss the issue with the KP government and the security forces to allow the devotees to access the shrine building without further delay.

The Shrine was closed for devotees by the security forces during the volatile law and order situation of the area. The committee was tasked to raise the issues with the chief minister, the President, the prime minister and chief of the army staff of the country.

They warned the government that they can no more tolerate the ban on their entry to the site and asked them to immediately open routs to the shrine.