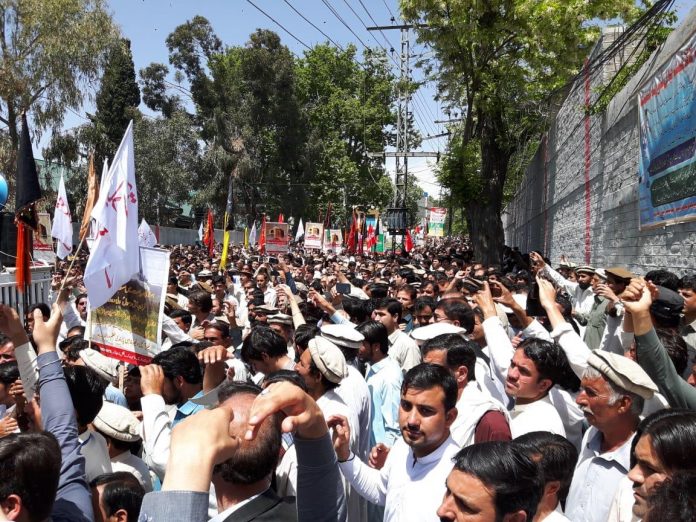 Thousands have protested against the government for blocking entry to a shrine in Kalaya, Orakzai tribal district. They flayed authorities for the ban on the further construction on the site and asked that government to immediately allow them to visit the shrine and pay their homage.

The provincial minister for health has talked to the protesters and ensured them that the issue will be raised with high officials and will be resolved. The followers of the shrine were gathered outside the Parachinar press club from different parts of the tribal district.

The authorities have blocked the entry to the shrine of renowned Sufi poet and religious scholar, Mir Sayyed Anwar Shah Said Mian in Kalaya due to due to sectarian violence in the region. The protesters asked the government that it is the duty of government to provide security and allow the people to follow their religious freedoms without any fear and restrictions.

They warned the government that they will no more tolerate the ban on their entry to the site and asked them to immediately open routs to the shrine. They chanted slogans that under the laws and constitution of the country every individual has full freedom to observe his cultural and religious practices without any fear or restrictions.

The protestors informed that government has the responsibility to facilitate and provide security instead of imposing restrictions. They were led by Anwar Ghag committee representatives. Besides holding flags, they were also holding the portraits of the chief of army staff General Qamar Javed Bajwa asking him to provide the legal and constitutional rights and allow them to enter the shrine of Sayd Mian.

Provincial health minister Hisham Inam Ullah Khan, who was visiting the district talked to the protesters and assured them that now the time of militancy has gone. He said that he will raise the issue with the concerned authorities. He asked them that it is his desire that they the ban in the shrine should be left at once and the peace-loving people should be allowed to visit the shrine.