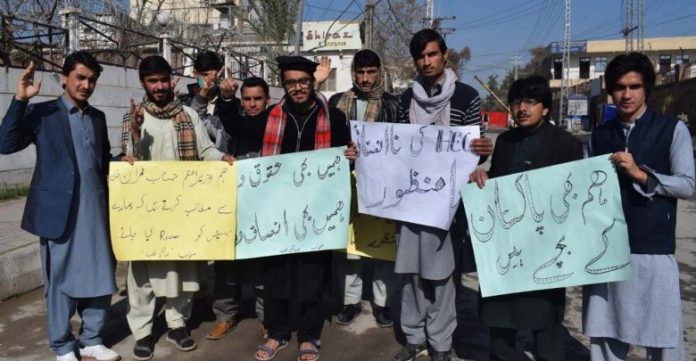 PESHAWAR: Students belonging to tribal districts on Monday demanded the government to restore the quota, allocated for tribal students before the merger, in medical colleges of the province.

Carrying placards inscribed with different slogans in favour of their demands, the students held a demonstration at Sher Shah Suri Road outside the Peshawar Press Club. Talking to media persons, office-bearers of Qabail Students Union (QSU) said that tribesmen had been ignored for the past several decades and denied basic rights due to which they could not improve their living standard. The students said that they need scholarships and quota system in educational institutions to get higher education.

Arshad Dawar, president of QSU said that the higher education commission has reduced quota from 97 to just 14 seats in medical colleges which is injustice with tribal students. He demanded that instead of decrease, there should increase in seats for the tribal students in colleges and universities of the country.

The students asked the government to immediately restore annual scholarship for tribal students and reconstruct all the destroyed schools in the tribal belt. The students said that because of the limited number of seats in these institutions many students were denied admission.

The students demanded of the government and HEC to provide them relief and restore the 97 seats quota for the students of tribal districts. They also urged the government to take tangible steps for provision of facilities to students in educational institutions of the agency.