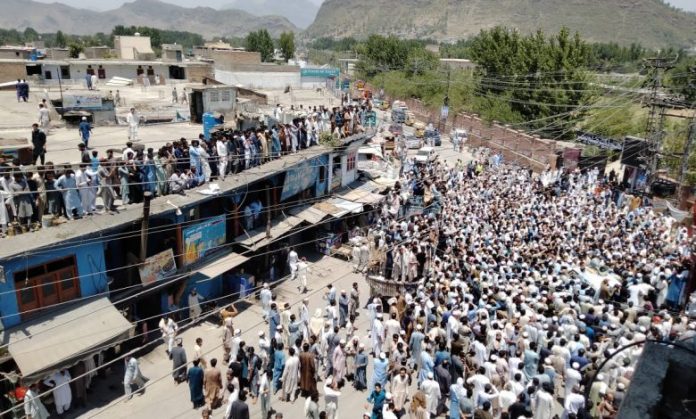 BUNER: A youth has been arrested on charges of blasphemy in Buner and a case has been registered against him.

A large number of people participate in the protests on Monday and Tuesday. On Monday, Momin Khan, who is an Afghan refugee and lives in Swari area of Buner, allegedly committed blasphemy. Local sources said the area people tried to tell the accused about the sensitivity of the issue, but he was adamant on his thoughts.

A person in the market where the incident happened told that the people in the market were furious over Momin Khan and wanted to kill him. He said he noticed the situation and immediately called police which reached immediately at the site and took the boy. He said the local people then gathered outside the police station and staged protest. The local elders also reached there to defuse the tension and asked the accused whether he has committed blasphemy, to which he admitted that he has committed a mistake. Afterwards a case was registered against him on the complaint of the eyewitness Muhammad Rizwan.

The local elders tried to convince the enraged mob to stay peaceful, but their appeal wasn’t responded and the protesters and police started clash. Several protesters were arrested after the clash. The road outside the Swari Police Station remained blocked for several hours, while electricity was also out during the protest.

District Police chief Abdul Nasir said the accused is under arrest and he would be tried according to law. Traders also kept their business shut on Tuesday to condemn the incident, while they would also ask the lawyer that no one would fight his case.