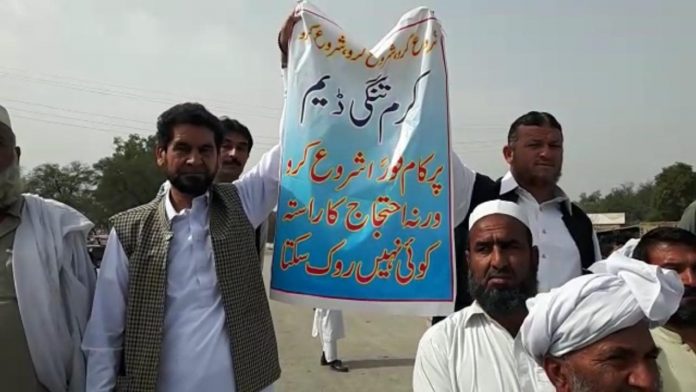 LAKKI MARWAT: On the call of All Parties, hundreds of protesters gathered at the Sara-e-Norang Bazaar after the Friday prayers against the delay in construction work on Kurram Tangi dam, Phase 2 project.

The protesters were led by the local leaders of the Qaumi Watson party, Amir Zada and Zia Ullah of Jamiat-e-ulema Islam- Fazal (JUI-F). The local leaders and workers of the Pakistan Tehrik-e-Insaf (PTI) under the leadership of Ashfaq Niazi also participated in the protest.
Besides, the shopkeepers and members of different unions also joined the protest to press the government to complete the Project without further delay.

While addressing the gathering, Amir Zada said that the future of our next generation is linked with the Kurram Tangi Dam project adding that the dam will irrigate thousands acre of barren land of the Lakki Marwat, thus it is essential that it is completed at the time.

In his address to the protesters, the JUI-F leader Zia Ullah said that the dam will bring ‘green revolution’ in Lakki Marwat and other districts.  While Ashfaq Niazi said that if the work on the dam is stopped due to the opposition of Tribal People of South Waziristan, the government should fulfil all their logical demands and remove their grievances.

Another protest was also held on Indus highway asking the government to release funds for the construction of Kurram Tangi Dam phase 2. District Nazim Iqbal Hussian, member National Assembly Maulana Anwar, and leader of Marwat Qaumi Jirga Amir Aslam Khan participated in the protest. They blocked the Indus high way at Malang Adda area to press the government for the timely completion of the project.

They said that the dam will bring ‘green revolution’ in their areas and said that people of Waziristan, who has become a hurdle in its timely construction. They warned that if the project was not completed at times they thrill move to Islamabad as the protest.