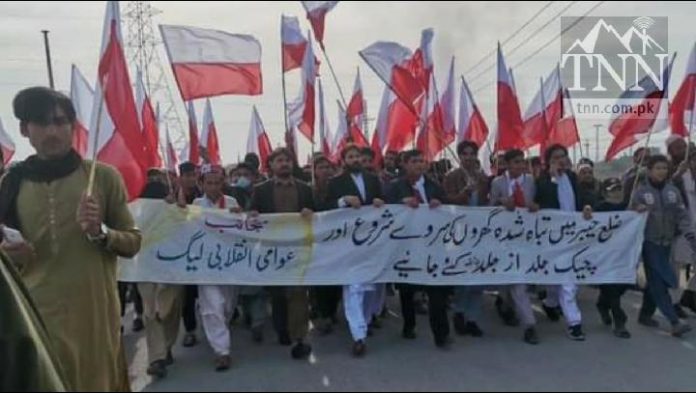 BARA: The owners of damaged houses and properties on Friday held a protest demonstration in Bara Bazaar of Khyber tribal district in favour of their demands of initiation of survey of damages and release of compensation cheques.

The protest was led by Awami Inqilabi League president Attaullah Afridi and attended by other office-holders, tribal elders and youth in large number. The major demands of the protesters from the Khyber Pakhtunkhwa government and district administration included release of compensation cheques after survey of 7,000 damaged houses, fresh survey and availability of female staff for distribution of aid under Sada-e-Amn Package.

Speakers during the protest said the affected people know very well how to get their rights. They said they had no other option but to come on roads after the government did not provide them compensation. They warned the district administration to ensure fulfilment of their demands otherwise they will make their lives difficult.

Friday’s protest came two months after a protest on the same issue by the Awami Inqilabi League activists in Bara.

The protesters gathered at Khyber Chowk of Bara Bazaar, burnt tyres and blocked the road for all kinds of traffic. The Inqilabi League president said while addressing the protesters that the deputy commissioner and local member of Khyber Pakhtunkhwa Assembly were obliging favourites in the survey of damaged houses which is unacceptable for local genuine affectees. He alleged that the survey team is being pressurised to benefit the favourite people at the cost of real affectees of Akakhel tribe.

Attaullah Afridi the people of Akakhel tribe have offered countless sacrifices for peace and security in the region and they suffered a lot during militancy and military operations and suffered massive damages. He said it is time now to compensate the tribesmen for their sacrifices. However, he alleged, some influential people were misguiding the survey team and interfering in its work due to which it is feared that the real affectees will remain deprived of compensation.

Why Afghan child was denied burial in Pakistan?