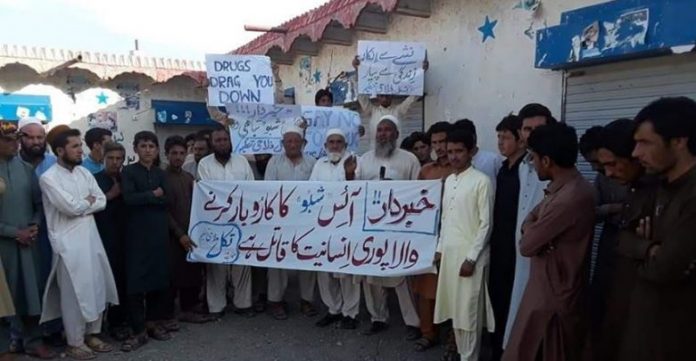 MOHMAND: Participants of a protest rally on Friday urged the government to take strict action to curb the rising use of the ice (methamphetamine) drug before it becomes an epidemic for society.

The protest rally was held in Atu Khel area of district Mohmand which was arranged by a local nonprofit organization, Takkal, in which students, social activists and elders of the area participated. The protestors were holding placards inscribed with slogans against ice drug use, seeking the KP government attention to take action against drug peddlers.

They said that those who sell Ice drugs to youth are the worst enemy of humanity and need no leniency. “The ice drugs have increased in tribal district Mohmand,” said Malik Sitter, one of the organisers of the rally. “It is negatively affecting our youth and the next generation.”

The president of Takkal non-profit organization, Rahmat Ullah Lewal said Mohmand district and especially Malik Halimzai area is a major hub for dealing and smuggling of the heinous drug. He requested the district administration to take immediate and strict action against drug pedlars and protect youth.

There have been reports about an increase in the use of the synthetic drug, which is also sometimes called party drug. Not in Peshawar alone, but the addicts of ice have alarmingly increased in other parts of the province and country.

The KP government has planned to get the long-awaited proposed legislation against ice (methamphetamine) and other drugs approved by the provincial assembly until the end of the current month. The issue came up for discussion in a high- level meeting on law and order chaired by Chief Minister Mahmood Khan.

The law-enforcement agencies for long demanding the government to draft law or amend the existence of drug control law to take action against the dealers and smugglers of ice for the last few years.