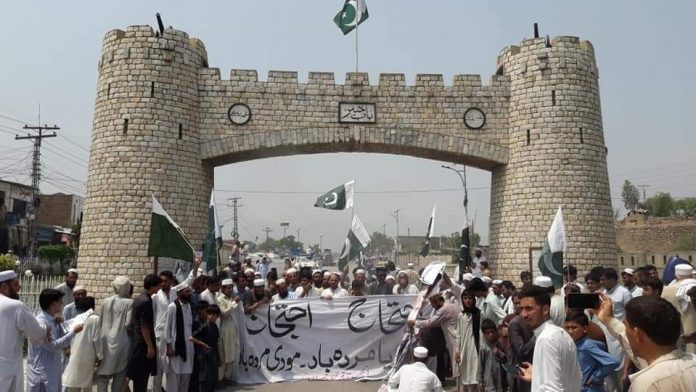 PESHAWAR: Protests were held across tribal districts against the ‘illegal move’ of the Indian government to change the status of Jammu and Kashmir (J&K) and asked the government that they are ready for sacrifices to help Kashmiries secure their right of self-determination.

In Mohmand, traders and civil society activists have staged rally and chanted slogans against the Indian government. They condemned the human rights violation in Indian Held Kashmir and urged the UNO and international community to take notice and give the people of Kashmir their right of self-determination.

In Peshawar Khyber Medical University (KMU) observed solidarity with Kashmiris and expressed whole-hearted support of the Pakistani nation to struggle of Kashmiri people for their inalienable right to self-determination.

The strongly protest the abrogation of articles 370 and 35 of the Indian constitution that deprived Kashmir of its special status.  One minute silence was observed and a rally was also held to pay homage to the martyrs of the liberation struggle of occupied Kashmir.

Earlier while talking to the audience speakers have urged the international community, the United Nations, and human rights organizations to take notice of the grave human rights violations in Indian Occupied Kashmir during the past few days. They said Indian troops are using rape, pellet guns, and mass burials to suppress ingenious freedom struggle of the people of Kashmir against India occupation.