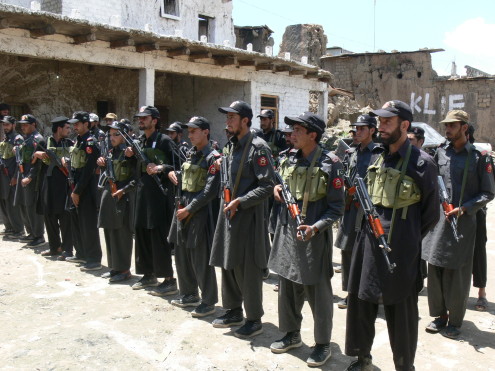 PESHAWAR: The Khyber Pakhtunkhwa Provincial Civil Services (PCS) Officers Association have called upon the provincial government to retain the old status of Khassadars and Levies personnel under the respective district administrations.

In a letter addressed to Chief Minister Mehmood Khan, Governor Shah Farman, KP chief secretary, and home and tribal affairs secretary, the PCS officers said the governor has signed an ordinance few days ago under which Levies and Khassadars have got police powers in the tribal areas. The letter said the director general and deputy director general of Levies will belong to police under the ordinance and Levies head in every district will be considered district police officer.

The letter mentioned that the Levies and Khassadar force personnel have initiated protests against forced sackings and they have also refused to provide security to the polio vaccination teams as part of their protest.

The letter mentioned that the PMS and PAS officers held a meeting at the Civil Secretariat on Thursday and agreed that this issue must be resolved after taking all the stakeholders into confidence. They called upon the government to review the recently promulgated ordinance and retain the old status of Levies and Khassadars. They said if the Levies and Khassadars are to be merged with KP Police, then they should be given equal salaries and other privileges.

Meanwhile, the Levies and Khassadars postponed today’s (Friday’s) sit-in at D-Chowk in Islamabad after Peshawar corps commander ensured support for their rightful demands.