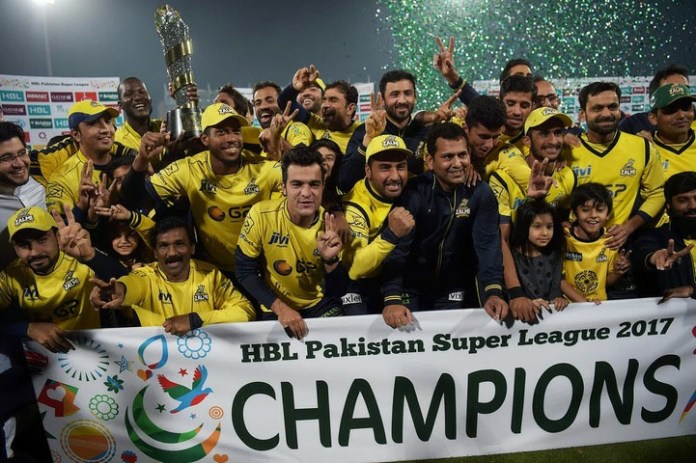 LAHORE, 06 March: Peshawar Zalmi outclassed Quetta Gladiators by 58 runs in a high voltage match, in front of a jam-packed Gaddafi Stadium on Sunday to win the Pakistan Super League 2017 trophy.

Chasing a target of 149 runs, Quetta Gladiators crumbled against a disciplined bowling display by Peshawar Zalmi and were bowled out for just 90 runs in 16.3 overs, without a single six in entire innings, a first time in PSL history when a team innings was finished without a six.

Gladiators never got the start it wanted in the chase of the target which brought them under the pressure and never allowed them to attempt a comeback in the game.

For Zalmi, Muhammad Asghar picked up three wickets while Hasan Ali, Hafeez and Wahab Riaz chipped in with one each.
Earlier, after a flying start Peshawar Zalmi was restricted to 148 for six in 20 overs, thanks to disciplined bowling by Gladiators’ Rayad Emrit from West Indies.

Some late fireworks by Darren Sammy helped Peshawar Zalmi post a respectable total of 148 runs on board. Sammy smashed three sixes and stroked one boundary to score 28 off 11 deliveries. Iftikhar Ahmed scored 14 off 21. For Quetta Gladiators, Rayad Emrit took three wickets for 31 runs, Hassan Khan got two wickets conceding 34. Darren Sammy was declared as man of the match and Kamran Akmal was declared as man of the series for his brilliant fire work.

Peshawar Zalmi skipper Darren Sammy also celebrated on the occasion with much zeal and enthusiasm.
The atmosphere was festive albeit a bit tense too, as cricket returned to the country after a long time. The presence of international cricketers at Gaddafi stadium added much flavour to the occasion and with it, Darren Sammy’s presence.