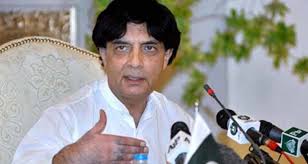 PESHAWAR, November 20: The Interior Minister, Mr Chaudhry Nisar, has said the government has given conditional permission to the Pakistan Tehrik-e-Insaf to hold rally in the federal capital Islamabad on 30 November.

He said that the government would take action against the PTI activists if they created any law and order situation.

Addressing a press conference in Islamabad on 19 November, he said the authorities would contact the PTI leadership within a few days to decide on a venue for the rally.

He said the PTI leaders would have to present their agenda before November 30 to make clear whether they want to hold a political rally or create law and order situation.

He added that the government authorities would not allow the party activists to damage property or disturb law and order in the federal capital.

He said the government would also specify routes for the rally. He said the PTI leaders would have to guarantee the district administration that they would not disturb peace in the area where they would hold their rally.

On the other hand, PTI chief Mr Imran Khan says they do not need to take permission from the government to hold rally in Islamabad and that demonstration was their legal right.

The PTI has been protesting in the country since 14 August, which is the independence day of Pakistan, demanding the Prime Minister Mr Nawaz Sharif to resign and hold re-elections.