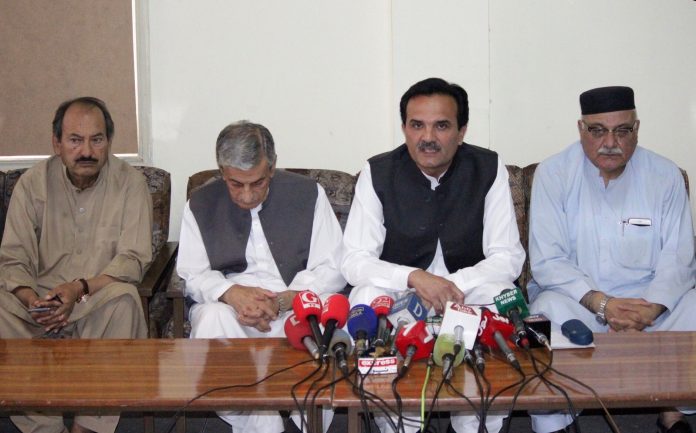 PESHAWAR: The Awami National Party (ANP) Senior Vice President Ameer Haider Khan Hoti has said that the PTI government striving hard to postpone election of the merged districts but the opposition parties would not let them further delay the polls.

He was addressing a press conference after the meeting of the party think tank at Bacha Khan Markaz. Ameer Haider Khan said that ANP will fully participate in the election and would not leave the ground to others to be elected unopposed. The ANP leader suggested that the election commission should issue its code of conduct for the elections and must keep security personnel to do their duties outside polling stations.

Haider Khan reiterated his party stance of not deploying the army personnel inside the polling station. The ANP believes that it will tarnish the image of the army as an institute and would raise objections over the election process.  Mr Hoti accused the government delaying the passage of 26th amendment bill from the Senate to postpone election tribal districts. He said that government should also clarify the security threats to election commission as the government has not appraised the opposition regarding these types of threats in advance.

Hoti asked the government that instead of finding deferent pretexts for postponement of the election, the government should immediately start preparing for elections and give an opportunity to the elected representatives to start development works in their respective merged districts.

The ANP central leader also condemned the imposition of section 144 in some areas of North Waziristan and asked the administration to immediately left section 144 for the campaign of the election. Hoti also criticized the government for the arrest of Asif Ali Zardari and Hamza Shahbaz Sharif and termed it part of political victimization to defame political leaders of the country.

While opposing the government’s reference against Supreme Court judge Justice Faiz Isa, Mr Hoti termed it an attack on the judiciary to pressurize judges to decide cases in their favours. The ANP leader revealed that on June 24 ANP will stage a protest rally against the alleged interference of government in judicial affairs and alleged corruption of government ministers in various projects.