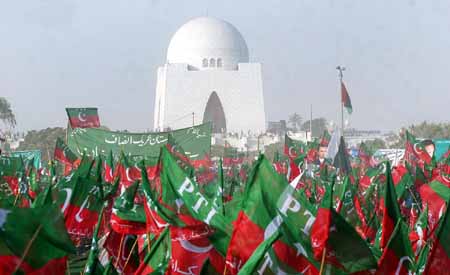 PESHAWAR, December 12: The Pakistan Tehreek-e-Insaf (PTI) under its ‘Plan-C’ is recording its protest in Karachi and claiming to close the entire city.

The PTI says it has planned to hold protest at 23 venues in Karachi today and people in large numbers are arriving in the city for this purpose.

The Sindh government says peaceful protest is the right of the PTI. However, it said the government machinery will swing into action if anyone tried to close the businesses forcibly.

Clashes were reported between the PTI and Pakistan Muslim League-Nawaz (PML-N) activists during the Faisalabad protest on December 8, in which one PTI worker was killed.

Under the Plan-C, the PTI has announced to shut down Lahore and afterwards the whole country after the Karachi protest.

The government is holding talks with the PTI today to find a solution to the political crisis. Analysts say both the parties are expected to arrive at a conclusion over the procedure of investigations into rigging allegations in the General Elections 2013.