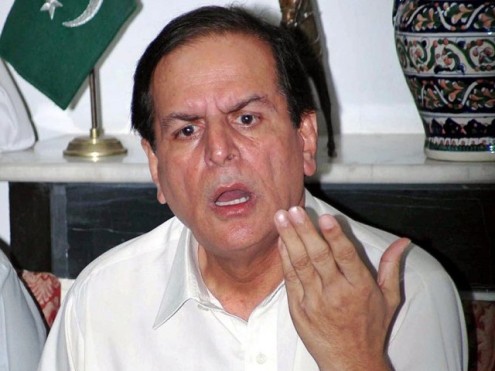 PESHAWAR, September 1: Mr Javed Hasmi, a Pakistan Tehrik-e-Insaf leader who had reached Islamabad as part of the party’s long march but later returned home, has alleged that PTI chief Mr Imran Khan had reached the federal capital for a specific aim and that he was following the directions of someone else – an oblique reference to the Pakistan Army.

Mr Hashmi told journalists that Mr Khan told him that he had made a plan of re-elections with support of “two departments”. He said the Supreme Court had allegedly assured ouster of Prime Minister Mr Nawaz Sharif and his brother Mr Shahbaz Sharif and that the Pakistan Army had asked him to follow Tahirul Qadri, chief of Pakistan Awami Tehrik.

Mr Hasmi said he left the PTI’s long march just because Imran Khan did not meet his promises and instead led the protesters towards the Parliament House.

Meanwhile, PTI leaders Mr Azam Swati and Mr Arif Alvi have rejected the statements of Javed Hashmi and said that now his statements were not worthy of consideration because he had been expelled from the party.

On 31 August, Mr Imran Khan announced to part ways with Mr Javed Hasmi after the latter abandoned the long march in Islamabad.