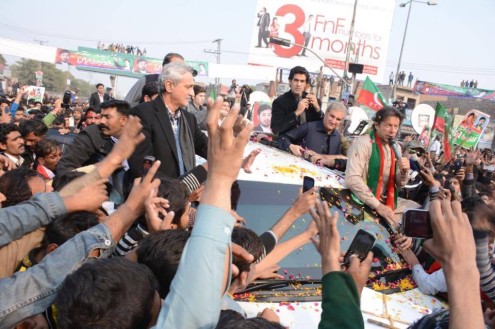 PESHAWAR, December 15: The Pakistan Tehrik-e-Insaf has started implementing Plan-C of their protest in Lahore by blocking roads at various points of the capital of Punjab province.

PTI leader Sherin Mazari says the PTI activists are protesting in 18 localities of Lahore and that party supporters from all over Punjab have reached the city.

She warned the Punjab government to avoid obstructing their protest otherwise the administration would be responsible for any untoward incident.

Meanwhile, Federal Minister for Information Pervez Rashid has said the PTI activists have started their protest in Lahore by pelting stones on the Metro Bus.

He said all educational institutions were open as per routine and that the traders had also rejected the call for protest.

The PTI and government teams have put forward their demands to carry forward negotiations. The second phase of talks will begin tonight.

The PTI has been protesting in the country since 14 August, demanding Prime Minister Nawaz Sharif to resign and hold re-elections. The party chief, Imran Khan, says they have launched their protest because they believe the 2013 general elections had been rigged.