PESHAWAR: The Pakistan Tehreek-e-Insaf (PTI) has suspended its campaign in Khyber Pakhtunkhwa for the upcoming general elections for a day after terrorist attack on the corner meeting of the Awami National Party (ANP) in Peshawar in which 21 people, including ANP leader Haroon Bilour, were martyred and over 60 workers were injured.

The PTI spokesman Fawad Chaudhry said in a statement issued by the party’s central media department on Wednesday that the attack on the ANP meeting was highly condemnable. He said the PTI shares the grief of the ANP workers over the tragic incident. He said the PTI stands with the Bilour family and other victim families and will not carry out its election campaign in KP on Wednesday.

He said a daylong mourning will be observed by the PTI to express solidarity with the ANP. He prayed for eternal rest and peace of the departed souls and courage for the bereaved families. 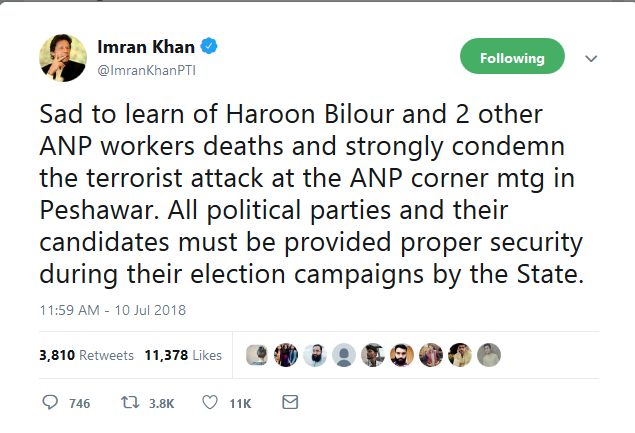 He said in a tweet that all the political parties and their candidates must be provided proper security during their election campaigns by the state.