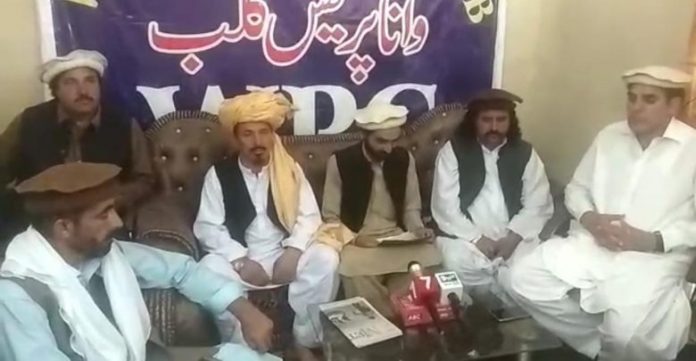 WANA: The Opposition parties candidates for PK-14, South Waziristan have alleged the state machinery is being used to pave way for the candidates of Pakistan Tehrik-e-Insaf (PTI) on Friday.

They were addressing a press conference at Wana Press club. The election candidates further alleged the no level playing field is being provided in South Waziristan as promised by the election commission of Pakistan.

“The district administration is making all effort for the success of PTI candidates,” said that opposition parties candidates. “The police and district administration have been assigned the task to ensure the win for the candidates of Pakistan Tehrik-e-Insaf.” The candidates said that so for the government officials have not been provided with the postal ballot papers due to which they are in fear that the votes might be used in the favour of ruling party candidates.

The candidates said that they’ve talked to the district returning officer and the deputy commissioner regarding the security situation on the Election Day but they’ve not provide any satisfactory response. They also strongly condemned the attack on the Awami National Party candidate and demanded the government to provide full-proof and equal security to all the candidates and political workers.

The election candidates warned that if any rigging was reported in the election they will hold strong protest across the country against the Election Commission of Pakistan the Federal and provincial governments.

The Election in South and North Waziristan districts has been overshadowed by the security situation, especially after the Khar Kamar tragedy on April 26. The administration had imposed section 144 in both the districts that was recently removed.