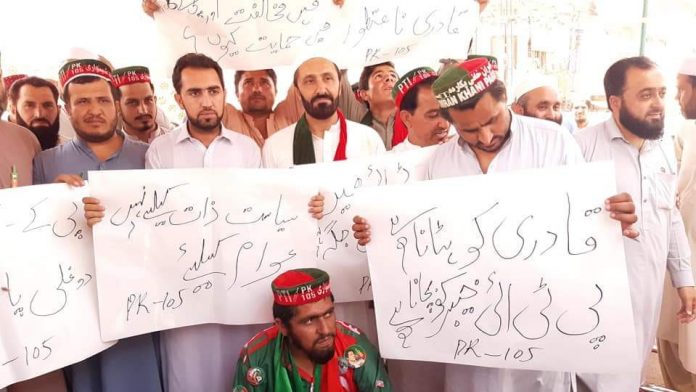 The senior leaders of the party Shah Hussain Afridi, Muhammad Hakim Afridi, Sadam Shinwari and others local leaders have alleged the Qaudri has violated the party rules and regulations by supporting an independent candidate in July 20 election instead of his own party candidate.

The PTI candidate for Pk-105 Shahid Shinwari also visited the protest camp. While addressing the protesters Shinwari said that the real purpose behind the creation of PTI was to free the country from corrupt leadership and returned the money looted by the corrupt politicians. He alleged that Noor Haq Qaudri has looted public funds therefore, there should investigation against him and asked the party leadership to dispel him from the party.

LANDI KOTAL: The candidate of Pakistan People Party (PPP) for Pk-105 Malikzada Nadeem Afridi while addressing at meet the program of Landi Kotal press club said that only the PPP has done exemplary developmental work for the people tribal areas during its tenures.

Malikzada added that the party will continue its past traditions and will work for the uplift of tribal districts to bring it into the mainstream. The PPP candidate claimed that it was the PPP leadership that has given political awareness to tribal people. He added right from Zulfiqar Ali Bhutto to Bilawal Bhutto Zardari, PPP leaders have visited the tribal districts and announced development projects.

The PPP party claimed that the merger of tribal districts with the province also become possible only through the efforts of PPP leadership. Malikzada asked the tribal people that the first ever election for the provincial assembly is going to held on July 20, therefore, only those candidates and parties should be voted who knows how to serve the people and give priority to public interest instead of his own.