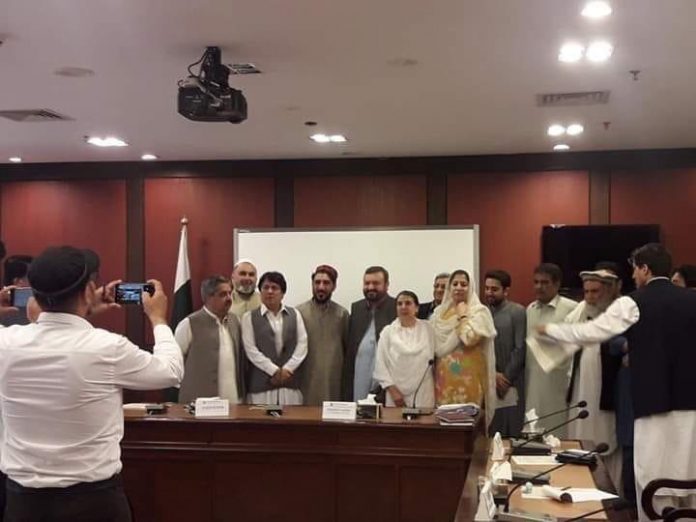 PESHAWAR: The Pakhtun Tahaffuz Movement (PTM) leader Manzoor Pashteen along with a delegation held a meeting with the Senate Reconciliation Committee in Islamabad on Thursday.

During the meeting Manzoor Pashteen demanded release of the PTM activists and end of curfew in Waziristan.

The meeting was chaired by Senator Barrister Muhammad Ali Saif which was attended by Senators Sitara Ayaz, Sajjad Turi, Dilawar Khan and members of the delegation headed by Manzoor Pashteen.

The PTM leader said during the meeting that curfew was imposed in North Waziristan after the tragic incident in the area on Sunday. He said the injured people could not be shifted to hospital due to curfew and people are also complaining about shortage of food. He said police have arrested PTM activists from all parts of the country who were protesting against the North Waziristan incident. He also claimed that the number of casualties was higher than the official figures. He demanded that all the arrested PTM activists, including Members of National Assembly Ali Wazir and Mohsin Dawar must be released immediately. He also demanded establishment of an independent commission to probe the incident.

The PTM delegation reposed confidence in the Senate committee and hoped that their demands will be fulfilled.

The members of the Senate Reconciliation Committee assured the PTM delegation that they will convey their grievances to the concerned authorities. They also urged all the parties to observe restraint and resolve all the matters through talks.

Protests started in different parts of the country after the incident in which several PTM activists were arrested. MNAs Mohsin Dawar and Ali Wazir have also been arrested on charges of inciting the protesters to attack the security check post in North Waziristan.