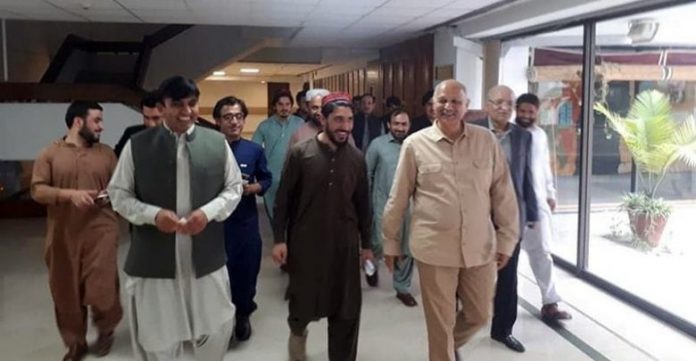 PESHAWAR: For the first time, the parliament held out an assurance to the Pakhtun Tahaffuz Movement (PTM) that its genuine grievances till be resolved.

The Senate special committee headed by Barrister Muhammad Ali Saif Tuesday invited the PTM leadership including its chief Manzoor Pashteen, MNA Mohsin Dawar and other leaders to Islamabad for listening to their point of view on certain issues. The meeting continued for three hours during which both sides exchanged views in a peasant atmosphere.

Manzoor Pashteen raised the issues of missing persons, landmines and other rights of the people of Pakhtunkhwa, particularly the tribal districts. Pashteen also urged the need for formation of Truth and Reconciliation Commission. He expressed confidence in the Senate committee for resolving all the issues. He said the PTM’s demands are very clear and simple.

Participants of the meeting observed that it was a historic meeting, and a positive one, which will go a long way in resolution of the issues in an amicable manner. Both the sides listened to the point of view of each other and developed good understanding. The PTM was urged to nominate a focal person for effective coordination and to present its demands explicitly so that the committee could move forward on it swiftly.

Muhammad Ali Saif welcomed the PTM leadership at the Parliament House and said that Pakhtuns have their unique culture and traditions like Jirga through which they like to resolve their disputes. He assured that the Senate committee will play the role of a bridge to address the issues raised by the PTM. He assured that no injustice will be committed with anyone. The head of the committee said the Senate being the House of Federation is representative of the federating units, wherein not only the problems and grievances of different segments are discussed and debated, but also tangible solutions are thrashed out through consultative process.