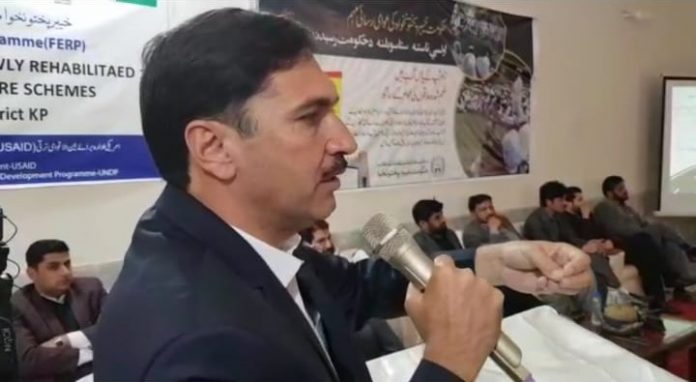 BARA: The Khyber Pakhtunkhwa government on Thursday formally launched public access campaign in Bara tehsil of Khyber tribal district under which the local population will be taken into confidence over the development schemes.

KP Minister for Relief and Rehabilitation Iqbal Wazir, Special Assistant to Chief Minister on Excise and Focal Person for Quick Development Programme Ghazi Ghazan Jamal, elders from eight tribes of Khyber district and officials of the local administration were present at the launching ceremony which was arranged at the Tehsil Jirga Hall.

Ghazi Ghazan Jamal said on the occasion that it is first time in the country’s history that elected lawmakers from merged tribal districts are holding consultations with the people of the area for development schemes. He said the aim of the campaign is to spend public money on development schemes according to their own set priorities.

Participants of the programme were given briefing about the ongoing development schemes and related details like budget etc. in Khyber tribal district. On the occasion, consultation was made with tribal elders regarding the ongoing and upcoming development schemes. The tribal elders pinpointed various issues regarding healthcare, education, unemployment and other problems and urged the need for resolution of these problems on priority basis.

On Tuesday, KP Minister for Agriculture and Livestock Mohibullah Khan visited Mohmand tribal district as part of the public access programme. The minister said Prime Minister Imran Khan, Chief Minister Mehmood Khan and other ministers are conducting regular visits to merged districts first time in the country’s history because they are very serious about development of the area and resolution of people’s problems.

Last Friday, Chief Minister Mehmood Khan during his visit to Landikotal launched public access campaign and said Rs83 billion will be spent on development projects in merged districts and the government will deliver on all promises with the people. He said the development targets of 10-year programme will be achieved within five years if all the stakeholders are on same page. He said all development projects in merged districts will be carried out strictly on merit and with transparency. The chief minister assured that only the people from merged districts will be appointed on vacant posts in these areas.