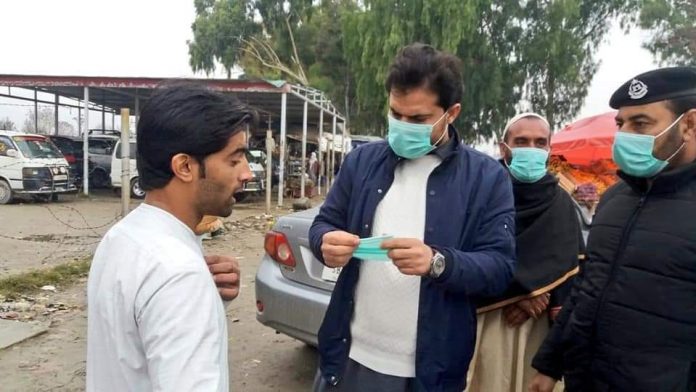 PESHAWAR: The weeklong campaign launched by the Khyber Pakhtunkhwa government to create awareness among the masses about the coronavirus pandemic has proved fruitless as people have been paying little or no heed to the official SOPs. Many have been terming the initiative as an eyewash on part of the government while others are calling it a wastage of time and money.

The bazaars, shopping centers, offices, and other public places such as parks and hospitals, etc are being flooded by people on daily basis, violating the principle of social distancing. Fewer people can be seen wearing face masks.

Sher Akbar, a resident of Bajaur, says that most of the government functionaries including some ministers and officials are not following the SOPs. “Instead of urging others, the government should follow its own laid down guidelines. We see both the government and the opposition politicians are holding public meetings and gathering large crowds. When the government is not honoring the SOPs, how it would urge the public,” he questions.

Akbar observes that the awareness campaign launched by the government is meaningless as people are visiting the cities and bazaars as per normal routine. Same is the situation in most of the public offices including Nadra where a large number of people come daily, he continues.

According to Kashif ud Din, a Peshawar-based senior journalist, the awareness campaign is nothing but a wastage of resources. “This drive doesn’t seem to benefit the public. It is only limited to social media. There is no mechanism to monitor the violation of the SOPs and penalize those who violate the guidelines,” he remarks.

“The government recently concluded another campaign launched through the print media. It was another futile exercise as there was no mechanism of monitoring,” he continues.

On the other hand, government officials assert that the campaign is effective and the public is being informed and educated about the pandemic and the precautionary SOPs.

“The second wave may prove more fatal and we need to be more vigilant,” Fazal Raheem, the assistant commissioner of Khar tehsil of Bajaur tribal district, says.

“We have regularly been holding informative sessions with the public and educating them about the corona SOPs. Up to 80 percent of the masses have been informed and educated in the recent campaign. Their response is very positive and they have been taking our advice seriously,” he tells TNN.

He admits that the majority of the people are not wearing masks as they are not used to it. He, however, adds that people have started wearing facemasks after the awareness campaign.

“We have made it mandatory for the public transporters to wear facemasks. Those violating the SOPs are being fined. Besides, we are also imposing fines on shopkeepers and sealing their shops for not following the guidelines,” Fazal Raheem continues.

“Our teams have so far visited different bazaars of the district and shared valuable information about the pandemic with the public in banks, hotels, and other public places. We have educated them on how they could keep them protected from infection. We are also distributing free masks and sanitizers among the public. We hope that the anti-corona drive will bear good results,” he concludes.