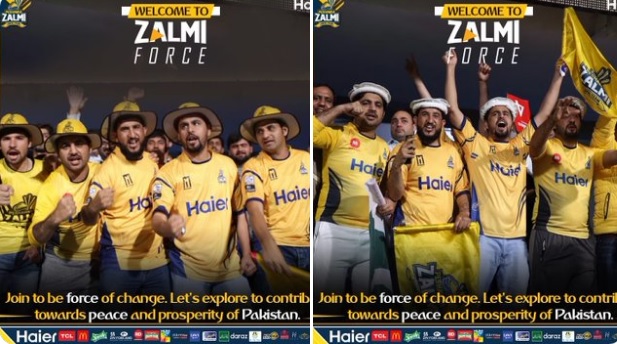 PESHAWAR: The Peshawar Zalmi has launched ‘Zalmi force’ with the aim to provide youngsters with a platform to engage in positive and constructive activities across the country, said Peshawar Zalmi on Tuesday.

The statement issued by Peshawar Zalmi Department said that the program has been started under the Peshawar Zalmi Foundation. The youth was asked to register themselves on the official websites of the Zalmi foundation.

The statement added that after the successful launch of Zalmi Global league, Zalmi Madrasah league, Zalmi School league, Zalmi force program has been launched which aims to engage youth in positive and constructive activities across the country.

A statement issued in this regard said that the program will employ youth across the country in positive activities and work for the uplift of society. They will also be the part of all the positive efforts like the anti-polio campaign, anti-drugs campaign, sports promotion and other such constitutive efforts in the country.

The statement further added that through www.Zalmiforce.com, youth from all the cities of the country will be registered. They will be connected through the central Zalmi force via the Zalmi force centres at the district levels where they will participate in the social services and the promotion of sports.

The statement said that Peshawar Zalmi is the only cricket franchise in Pakistan that is connected with more than 30 sports clubs at the international level. And now through Zalim Foundation, the organisation is setting up a unique platform with the aim to promote the talent of youth boys and girls.

The program will also provide opportunities to the talented youth to play the role of the leadership thus the future leaders would be created from the platform of Zamil force.

“The nation lies in the of hands progressive youth, we are blessed to have vibrant youth in Pakistan & whose contribution in bringing change in the society is phenomenal. Come & join  ZalmiForce to work together for the prosperity of the land, positivity & national integration, Peshawar Zalmi Owner Javed Afridi said on Twitter.