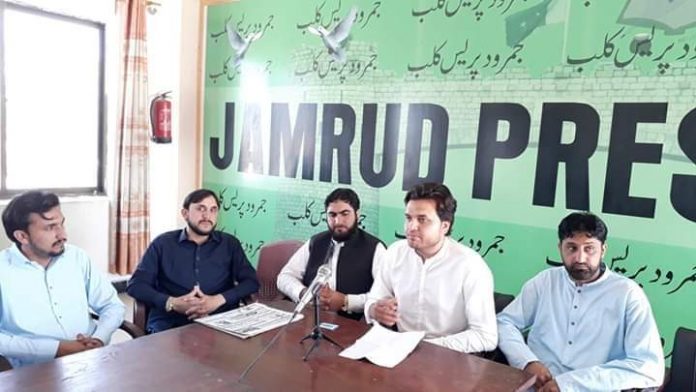 JAMRUD: The organisers of Qabail Super League unveiled the logo of the mega cricketing event at Jamrud Press Club on Sunday.

Nabeel Afridi of the Peshawar Zalmi and Afridian Foundation, along with his associates Hamza Afridi, Riaz Afridi, Farman Afridi and Shoaib Afridi unveiled the logo of the League at a press conference. Nabeel Afridi said one team from each tribal district will participate in the mega event on the pattern of the Pakistan Cup. He said all the matches will be played in the League style at Hayatabad Sports Complex in Peshawar in June.

The organiser said the event will be held on international pattern. He said 14 members of each 18-member squad must be local residents, while each team will have liberty to include four players from outside the tribal district. In the playing 11, he said, eight players must be local and three non-locals can be included. He said every franchise will have a base price of Rs300,000 and anyone can buy any franchise.

He said live streaming of all the matches will be available from four cameras. He said the live streaming will encourage the players to perform better and get the attention of selectors on higher levels. He said combined dinners will be arranged for the owners of the franchises.

To a question, Nabeel Afridi said all the matches at the League will be of high standard and tribal cricketers will benefit from it. He said all matches of this year’s edition will be played in Peshawar, while matches in the next edition will also be arranged in the tribal districts.

He said the tournament will be played in T20 format and the highest wicket tackers and highest run makers will also get purple and orange caps.