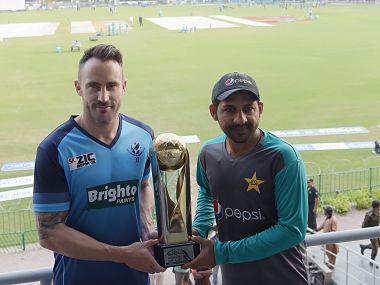 PESHAWAR, 15 September: The third and final Twenty20 International between Pakistan and the World-XI will be played at the Qaddafi Stadium, Lahore on Friday (today).

This is the same stadium which hosted the first two matches between the two sides. The decisive match of the Independence Cup will begin at 7pm and will be played under artificial lights.

Fast bowler Hasan Ali, who missed the second match due to back pain, is likely to join the team in the match.

Presently, the series is levelled at 1-1 after the visitors won the second match by seven wickets on Wednesday thanks to a blistering batting by Sri Lankan all-rounder Thisara Perera and a classic knock by South African great Hashim Amla.

A superb batting display from Babar Azam coupled with some fine bowling performances by the bowlers helped Pakistan won the first match by 20 runs against the visiting World-XI on Tuesday.