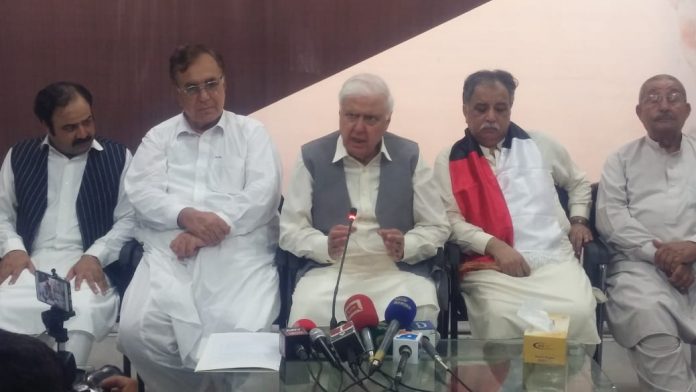 PESHAWAR: The Qaumi Watan Party (QWP) Chief Aftab Ahmad Khan Sherpao has asked the election commission of Pakistan not to deploy Pakistan army personnel inside the polling stations and election be held under the Khyber Pakhtunkhwa police.

He was addressing a press conference at his residence on Saturday.

Aftab said that opposition is united today that is a positive sign for democracy in the country. The united opposition wants free and fair elections throughout the country as, he claimed, the last year election has already been made controversial and besides PTI every other party is complaining of foul-play.

He made it clear that the united opposition will ensure a free and fair election in tribal districts, where the first ever election for the provincial government has been scheduled for July 20. The QWP chief has also alleged that PM Khan has been ‘selected’ and there is no harm is describing him a selected Prime Minister. `

He accused that government of taking loans from the International monitory fund (IMF) and put the poor masses under the new burden of inflation and ‘illogical’ taxes. “The PTI has put the country stability in danger,” alleged the QWP party leader.

The senior politician told the government that there should be accountability but only the opposition parties shouldn’t be targeted for political gains. He accused the KP government of corruption in BRT construction and asked the National accountability to probe it and punish all those responsible for it.

He said that the united opposition has taken the unanimous decision to remove the senate chairman, Sadiq Sanjrani through a resolution which will be presented in the Senate on July 11. The opposition will also unveil their name of their unanimous nominee for the Senate chairman on the same day.