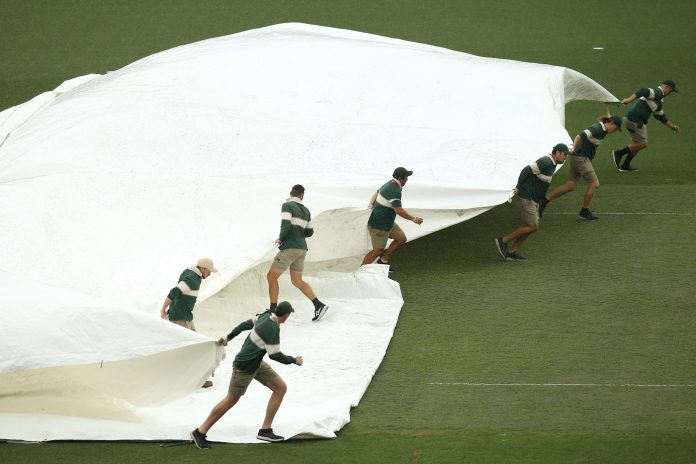 PESHAWAR: Rain saved Pakistan in first match of the three-match T20 series against Australia in Sydney on Sunday.

Pakistan after being invited to bat first by Australia were reduced to 107 runs in 15 overs when rain stopped the play. Pakistan captain Babar Azam scored well for his unbeaten 59 runs off 38 balls and Mohammad Rizwan scored 31 off 33 balls. Fakhar Zaman and Imad Wasim were out without scoring, Asif Ali scored 11 and Haris Sohail scored only 4 runs.

For Australia, Starc and Richardson took two wickets each, while Agar took one wicket.

Australia’s target was revised to 119 runs from 15 overs due to rain delay. Australia started their inning in a very aggressive manner and they were playing on 41 runs in 3.1 overs when umpires had to stop the play again due to rain. The rain did not stop and umpires had to call off the match. Australia were looking good to clinch the match, but rain denied them. Captain Aaron Finch was playing on 37 off just 16 balls and David Warner was playing on 2 runs off 4 balls when rain stopped the play.

Mohammad Irfan, who made a comeback to the team after more than three years, conceded 31 runs in two overs, while Mohammad Amir conceded 9 off 1.1 over. Irfan will be under pressure to retain his place in the second match as he didn’t look in great form.

Australia looked extremely frustrated over the rain which denied them victory in the match.

“It’s frustrating. The 20 minute break in between innings was an interesting one. When you lose a few overs and then you still have a 20 minute break I thought that was really interesting. It probably played out of our hands at that moment. But you can’t do too much about the weather,” Captain Aaron Finch said.

He said if overs are cut off the game due to rain and still a 20-minute break is taken, it doesn’t make much sense to him. “But it’s part of the rules and you can’t do much about it. But we played really well. To restrict them to 107 off 15 overs was a great effort and then to be on track to get them was nice,” he said.

The next match of the series will be played in Canberra on Tuesday.