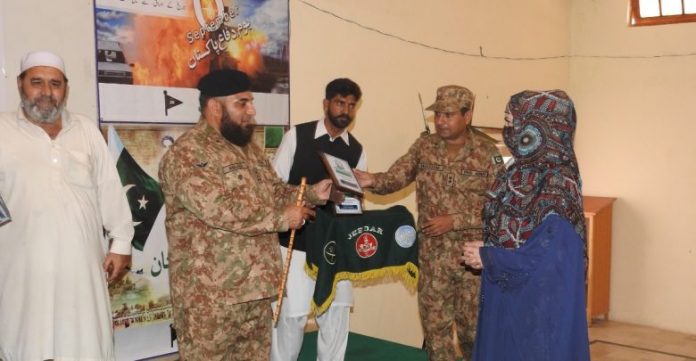 WANA: Razia Mehsud, the first female journalist in South Waziristan, received an award from the Pakistan Army during a function arranged in connection with Defence and Martyrs Day on September 06 in Sra Rogha area.

The Tribal Youth Association had arranged an education seminar and talent award show on the occasion. During the function, students presented speeches in connection with Defence and Martyrs Day and importance of education. The first, second and third position holder female students received laptops, while other participants received awards.

Razia Mehsud was also invited to the function where she received a special award for her services being the first female journalist working in the tribal region.

Razia Mehsud while speaking on the occasion said people in our region generally discourage girls’ education. She said girls’ education is more important than the education of boys, as it is mother who is responsible for initial training and character-building of children and an educated mother can fulfil these responsibilities in a befitting manner. She said a healthy and educated mother plays crucial role in making future of her children.

Razia Mehsud said it is imperative for every Muslim man and woman to get education. She said men and women are important pillars of society and both need to be strong and educated for a forward looking society. She said Islam keeps women in high esteem and gives rights to women to get education.

The woman journalist called for an end to stereotypes and primitive thinking in which women are treated like children and they cannot make independent decisions for themselves. She said men were not allowed inside women polling stations in South Waziristan in the recent provincial elections and women didn’t know how to cast vote. She said the female presiding officers made fun of uneducated women as they were unaware of the process.

Razia Mehsud said if someone doesn’t want to send their women for jobs then it is fine, but they shouldn’t keep their girls deprived of education on this pretext. She said she is a proud daughter of Waziristan and she wants to be a role model for other women in the region. She said there is no dearth of talent among girls in tribal districts, but they need opportunities.

She said she was not at ease to see that no even a single girl student took part in the speech competition, which depicts the poor state of female education in South Waziristan.