KHAR, 30 August: Students at the primary school of Alimano Killi in Bajaur Agency are getting education under the open sky due to damaged building of the school.

The local people said the school boundary walls were collapsed in a flood few years ago. They said due to fear of collapse of the classrooms, the students sit outside classrooms in harsh weather conditions. They called upon the government to reconstruct the school building.

“The school building is vulnerable and may collapse any time. Students attend their classes outside the classrooms and go to home in case of rain,” a local resident told TNN.

Another resident of the area said the condition of doors, windows and walls is extremely poor.

“The government should allocate some funds for reconstruction of the school to save the future of the students,” he said.

The school principal said over 200 students are enrolled in the school and many other children also come to the school without getting proper admission. He said the school building could not be repaired despite several demands to the government. 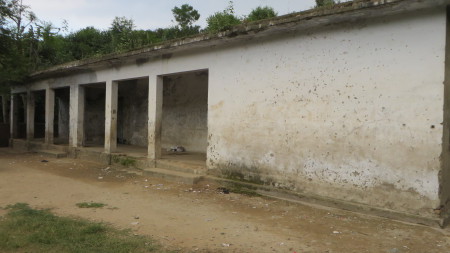 “I will appeal to the government and well off people to contribute towards the reconstruction of the school to save future of our children,” he said.

This school was established 25 years ago by a religious leader of Alimano Killi on self-help basis.