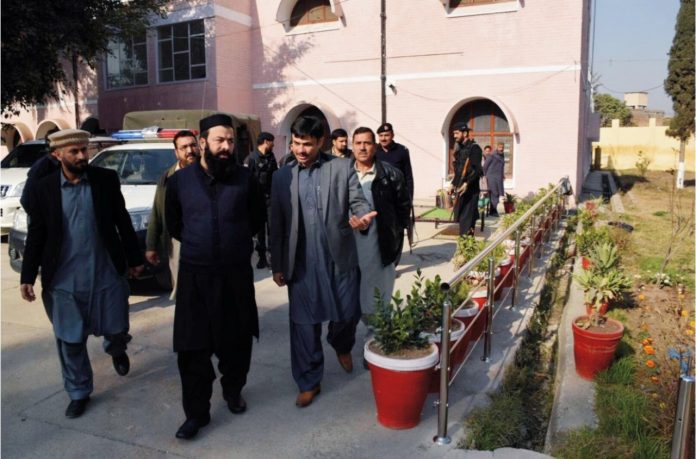 According to a statement issued by the district nazim’s office, Arbab Asim visited the site of under construction rehabilitation centre on Wednesday and directed District Social Welfare Officer Jaafar Shah and Social Welfare Rehabilitation Officer Jawad Hassan to ensure completion of the centre in time. The nazim said work on the centre will be completed soon and it will be inaugurated by the chief minister.

The officers assured Arbab Asim that work on the centre will be completed within 15 days. They said the 100-bed rehabilitation centre will not only provide treatment to crystal meth drug addicts, but will also treat heroin and other addicts.

The district nazim said drug addicts will be provided treatment at the centre for 15 days after conducting their HIV, HCV and dope tests. He said the rehabilitation centre will provide treatment to both male and female patients. Arbab Asim said the government is taking emergency steps to prevent the spread of the dangerous drug. He said an awareness campaign will also be carried out in Peshawar to inform the people about the dangers associated with this drug.

The use of ice drug has increased in Pakistan, particularly in Khyber Pakhtunkhwa, to dangerous proportions which is a cause of concern for the people, particularly the parents who are extremely concerned about the use of crystal meth by students in the equational institutions.

During the year 2018, police arrested 341 people dealing in crystal meth in Peshawar and recovered the drug from their possession. Some of those nabbed were found selling near the educational institutions of the country. Several deaths have also been reported due to the use of ice drug and the situation is going from bad to worse. Even a tiny quantity of the drug can cause major loss. Peshawar Police has admitted that ice drug is emerging as a big challenge which needs a special strategy.

Keeping in view the challenge, the KP government has decided to bring a new bill to combat the usage, manufacturing and trafficking of crystal meth which will be presented in the KP Assembly within few days. The federal government has drafted its own bill to outlaw crystal meth, which recommends punishment up to life imprisonment for smugglers.