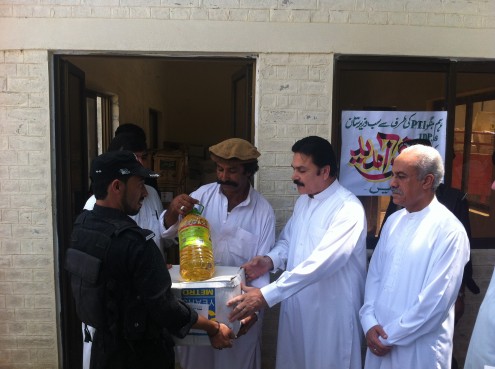 HANGU, August 22: International oil and gas exploration company, MOL, has distributed food and other items among the displaced families of North Waziristan.

A ceremony was held in Hangu where aid was provided to 450 displaced people. The package included 5kg sugar, ghee, pulses and flour.

The Hangu Deputy Commissioner, Mr Naeem Anwar, and head of the company Colonel Niazi were also present at the ceremony.

Those who receive the relief items thanked the company and also demanded the government take care of the IDPs living in Hangu.

“These food items are not sufficient for us because we have large families. However, we are thankful to the company for the favour,” said one of the beneficiaries.

He added that the administration officials denied relief items to most of IDPs just because there identity cards mentioned two home addresses. He appealed to the government to resolve this issue as soon as possible.