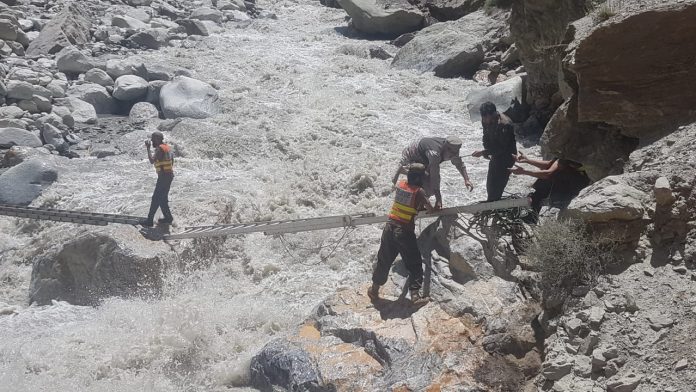 He added their first responsibility was to evacuate the stranded, provide medical assistance and evacuation. Medical teams along with medicines have been deployed and so far dozens of persons including women, patient and children have been evacuated to safe locations.

The DC said that heavy machinery of Communication and Works, Rescue 1122 and National High Authority have been deployed to restore the bridges. The administration said ration for 300 Families has been prepared and until now 50 families have been delivered ration while150 families package is dumped at the helipad to be airlifted to Golain.

The authorities said that their response of PDMA, NDMA, Rescue 1122, Chitral Levies and other agencies was quite rapid, effective and successful. However, a number of challenges such as accessibility, lack of resources and flow of flood water have hampered their efforts.

PESHAWAR: A GLOF event was reported in Roghali, Golain valley, Chitral in the afternoon of
07th July 2019. The englacial lake started to develop in the third June 2019 in the glacier of Nullah just before the jungle in Rogali valley at an elevation of 4500 meters above sea level.

The event was triggered due to the lake which was formed two weeks ago as clear from satellite images. Initially, the lake seems to be englacial lake which was not clearly
visible. The size of the lake increases abruptly, covering an area of about 0.043 square
kilometres, as per satellite image acquired on 3rd July 2019.

This lake ultimately results in an outburst that created a GLOF event yesterday evening, 7th July 2019, damaging road from multiple locations. The drainage from the lake and glacier is expected to remain erratic in coming few days. Moreover, the debris flow and pieces of glaciated ice are likely to accompany the drainage water which may exaggerate the damage along the river flood path.

The temperatures in Chitral valley are persistently high and will remain high in the coming week which may enhance the melt rate of glaciers triggering the probability of high flows in the rivers. Therefore, the communities are advised to remain highly alert due to uneven flow in the valleys and stay away from the river paths.