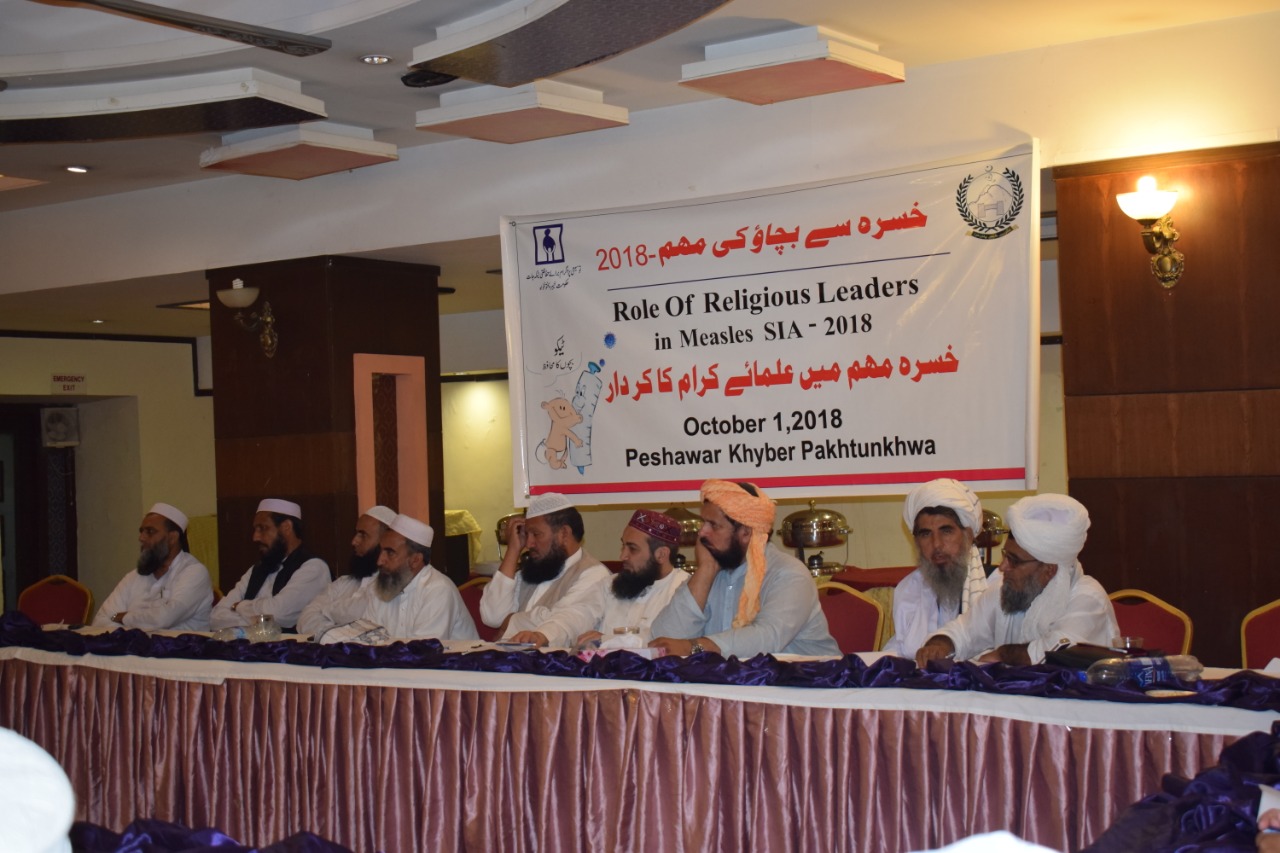 PESHAWAR: A day long orientation workshop on measles Vaccination Campaign 2018 was organized by the Directorate of Health Khyber Pakhtunkhwa, in collaboration with WHO and UNICEF on Monday.

Renowned religious leaders and district khateebs of Khyber Pakhtunkhwa participated in the event and pledged their support for measles campaign starting in the country from October 15, 2018. The objective of the orientation workshop was to orient and sensitize district khateebs across the province who would further mobilize the communities to get their children vaccinated during the campaign.

Mufti Shaukat Ullah, a prominent religious scholar; Member of National Islamic Advisory Group and Provincial Scholar Task Force, while speaking on the occasion, urged parents to vaccinate every child in their household and community against measles. He said that vaccines were designed to protect us from a highly infectious disease, which can have fatal consequences. He further told that that it is the prime responsibility of religious leaders to educate the masses on public health issues and mitigate myths and misconceptions about health practices and urge the parents to protect their children from deadly diseases through essential immunization and other preventive measures. He told that children are a gift from God and we should preserve this gift.

Another religious Scholar Mufti Abdul Ghani told the participants that the main causes of deadly diseases is lack of cleanliness, pollution, contaminated water and availability of substandard food items in the bazaras. Another reason is deviation from the teachings of the Holy Quran. He told that Ulema can play a pivotal role to promote health and they should educate the masses on good health practices and habits through their weekly sermons and counselling.

Mulvi Fazal Mula from Chitral said Allah will never change the condition of the people until they change it themselves. He told that the protection of our children is not the sole responsibility of the government but it is the joint responsibility of parents and community and other stakeholders. He urged the participants to disseminate key health messages to everyone who is in your reach and put your efforts in this noble cause. He suggested that this orientation should be replicated for all the religious leaders in every district.

Dr. Jamil, Health and Nutrition Specialist, UNICEF, and Dr. Hamayoon Afridi, WHO, answered the questions of the participants.

Dr Ayub Rose, Director General of Health Services Khyber Pakhtunkhwa, told the participants that Expanded Programme on Immunization (EPI), has organized a National Measles Vaccination Campaign in all union councils in Pakistan from 15th to 27th October 2018. The government is targeting vaccination of approximately 32.46 million children from 9 months to 5 years of age against measles with the support of its technical partners, UNICEF and WHO. The measles vaccine will be available free of cost at public health facilities and outreach sites.

He told that despite several challenges, vaccines are saving more lives. The measles vaccine is safe and effective, and has been approved and recommended by the WHO. The same vaccine has been used worldwide for more than 60 years. In fact, the child is more at risk without vaccination against measles.

He said that religious scholars are trusted and respected in Pakistan, especially in rural areas of KP where women, men, and youth rely on them for guidance on many personal and family matters including health issues for decision making. The religious scholars help their followers make important decisions through individual counseling or weekly sermons. Essentially, religious leaders can play an active role in the dissemination of accurate information about health issues

Mufti Abdul Wahab, a prominent scholar, ended the workshop with a pray for the success of the campaign.