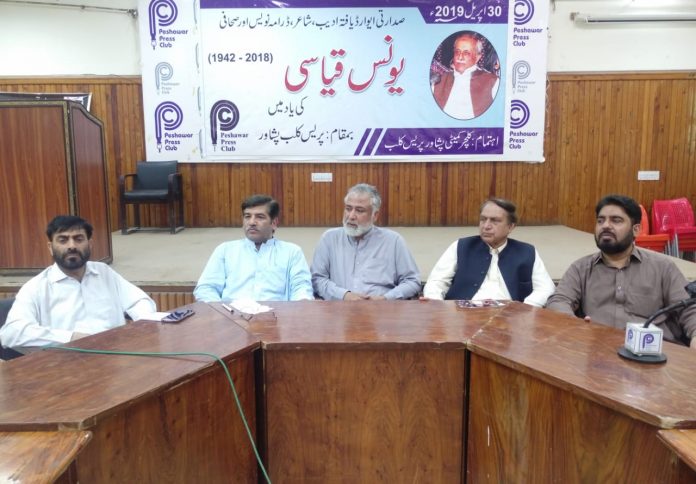 PESHAWAR: Pashto writers, poets and journalists have asked the government of Khyber Pakhtunkhwa (KP) to recognize the services of late Pashto and Hindko poet and writer Younas Qiasi.

The event was organized by Culture Committee of Peshawar Press Club (PPC) here on Tuesday to pay tributes to popular Urdu, Hindko and Pashto Poet. The committee has informed that the purpose of holding such a ceremony was to remember his literacy services to the culture of the province.

Speakers while shedding lights on professional contributions of Younas Qiasi said his services for promotion of literature, local tradition and journalism would always be remembered, They added that Younas Qiasi was a playwright who used his pen to project real aspirations of common man and the theme of his dramas were aimed to highlight the drawbacks of the society suggesting positive approach to address them.

They said folk songs written by Younas Qiasi have also popular among new generation and informed them about the brighter image and hidden aspects of their culture.

During his life, Younis Qiasi has published a collection of Urdu columns titled ‘Qiayas Ariyia’. However, the collection of his Pashto poetry, Juand Pa Megatoon (life in ants’ hole) is still unpublished.

He has also penned famous songs include the evergreen song, Mung Yun Da Khyber Zalmi, which was composed for a Pashto movie, Darra Khyber, and sung by famous singer Khyal Mohammad.

He received many awards, including President’s Pride of Performance.

The speakers also demanded the provincial government to attribute one of a public building with the name of Younas Qiasi and demanded district government give Fakhr-e-Peshawar award to him for his memorable services in journalism, poetry, script and playwriting.