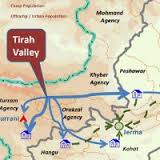 BARA, 29 July: Displaced persons of Maidan in Bara tehsil of Khyber Agency who were repatriated to their native areas two years back said that they have yet to receive the package which the Khyber Pakhtunkhwa governor announced at the time of their return.

They told the TNN that the governor had announced the package, which included Rs. 25,000 cash and Rs. 10,000 transport allowance, for each returning family in 2013. But only a few repatriating tribesmen got benefitted from this assistance.

“Hardly five per cent of the repatriated tribesmen were given Rs. 25,000 cash. They went back to their homes with the hope that they would some financial assistance from the government [to start a new life in their areas]. The entire village has turned into ruins and the pledged assistance of Rs. 25,000 has not been given to the affectees.”

Political administration, however, said though the pledged assistance was delayed, yet sooner or later each and every repatriated family would get it.