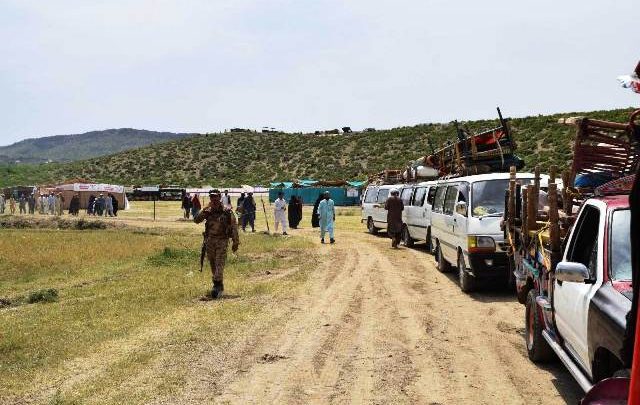 KALAYA: Repatriation of Mulakhel tribal people has begun who were displaced due to military operation which started against militants in the tribal district of Orakzai almost  a decade ago.

Assistant Commissioner Upper tehsil of Orakzai, Haider Hussain said that displaced people of Mulakhel tribe would return to 25 villages after spending 10 years in displacement. He added that so far around 1864 famileis have returned to Alifkhel killay, Sattarkhel, Baqar Garhi, Kanz village, Oray village and other villages.

The process which started on 20th of this month  would continue till October 26, he said, adding that a checkpoint has been set up at Yakhkandao area for guidance and facilitation of the returning families.

Meanwhile, the returning person including Azghar, Gul Kamal and Khyal Khan criticized the district administration for poor arrangements and non provision of assistance to them. They demanded of Governor Khyber Pakhtunkhwa Shah Farman to take its notice and ensure that they get financial assistance of 35000 rupees for their return.

Some of the returning families complained that are being repatriated by the administration to damaged and destroyed houses ahead of the harsh winter. The asked the government to compensate them for the damaged houses at the earliest. Locals said that Upper Orakzai tribal districts is the worst affected in terms of house damages and many families returned to the area over the last two years are still living in tents as these poor families have not been compensated by the government for their damaged houses.

Though the government is claiming that it has repatriated more than 95 percent of displaced families to their respective towns in tribal region, but, still there are thousands of families from Khyber, Orakzai and North and South Waziristan are living in displacement.