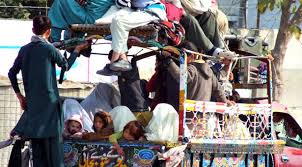 MIRANSHAH, 18 November: The process of repatriation of internally displaced persons (IDPs) to North Waziristan is continuing according to the new schedule announced by the political administration.

Political Agent Kamran Afridi said under the new schedule, 1,700 families will be sent to Moski Killi in Mir Ali tehsil from Saturday till Wednesday. He asked the displaced persons to reach Bannu camp by 6:00 tomorrow (Saturday) for their journey to their homes.

He said the displaced persons living on eastern side of Bachai road in Mir Ali should not to go to camps as another date for their repatriation will be announced.