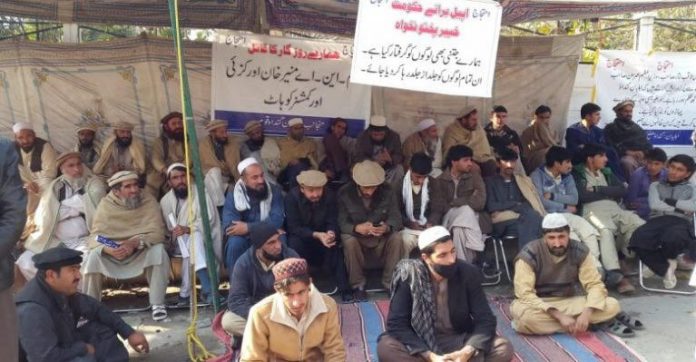 PESHAWAR:  Elders of Gandao Para Chamakani has set up a protest camp outside the Peshawar Press club asking for the release of their 60 persons arrested by the district administration over dispute with another tribe.

The protest camp has now entered into second day.

While talking with TNN, Haji Haliq Noor said that three months back, they had signed a agreement with Haji Khel tribe under which the tribe was to pay Rs 5000 per truck as transit fee for taking out minerals from their locality.

He added that elders of the Haji Khel tribe have also accepted the agreement but some people, who don’t want peace in the area, have refused to accept the written agreement.

They have also alleged that the deputy commissioner, Kurram and assistant commissioner, Member National Assembly Munir Orakzai and commissioner Kohat Mutahir Zeb are directly supporting the people of Haji Khel tribe to capture their mines and mineral resources.

He said that some people have also blocked the way near the Mehraniya area, which they says, is a violation of their basic rights. “The administration has arrested our 60 people. This shows that we are still under the black law of Frontier crime regulations, despite of the merger with the province,” the protestors said. They’ve asked Khyber Pakhtunkhwa government to immediately release the arrested persons; otherwise, they will further extend their protest demonstration.

The asked the government to form an impartial committee to resolve their issues and prevent any bloodshed. “If our demands were not accepted, we will start protest outside the governor and Chief Minister house,” the protestors warned.