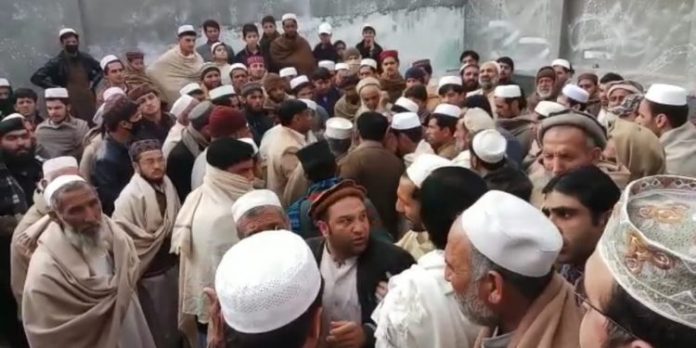 LANDIKOTAL: A five-year-old girl died after being hit by a speeding flying coach in Landikotal sub-division of Khyber tribal district on Tuesday.

The local sources said the incident happened at Wasif Shinwari Chowk in the morning. The relatives of the deceased girl and area residents put the body on the roadside and blocked the road for all kinds of traffic to record their protest.

The district administration and security officials reached the spot and assured the protesters to erect a speed breaker on the road by the evening. After the assurance, the protesters dispersed peacefully.

The Landikotal Bypass road passes from Shinwari Khogakhel to Torkham border. This road is not only used by the public transporters, but goods vehicles travelling to Afghanistan also use it. There are densely populated areas on both sides of the road and a number of public and private educational institutions are also situated along the road. Traffic accidents often happen on the road due to reckless driving.

Unknown miscreants demolished the centuries-old shrine of a religious scholar in Marchongi area of Kohat on Monday night.

The Shrine is known as ‘Bado Ziarat’ which is said to be several centuries old. Local sources said unknown miscreants demolished the shrine in the night and escaped the scene.

The area people have expressed anger over the incident and demanded the government to take action against the people responsible for this act. Police have filed a case against unknown miscreants and initiated investigation.

Meanwhile, a 15-year-old girl died when a pistol went off accidently in Buner on Tuesday.

Police sources said a boy was cleaning his pistol in Nawagai Kandao area of Buner when it went off accidently and the bullet hit his 15-year-old sister.