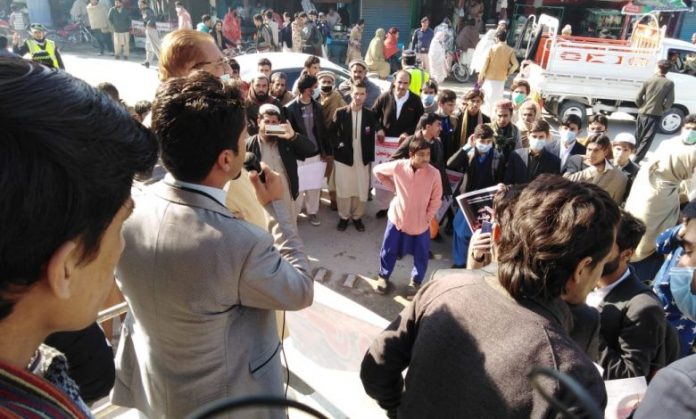 BUNER: The Students Action Committee on Saturday held a rally at the main Swari Chowk in Buner for restoration of students union.

Participants of the rally were carrying banners and placards inscribed with slogans regarding demands of restoration of students union, free internet facility, free education and stoppage of harassment incidents.

A large number of students attended the rally which was also attended by political activists and district leaders of Awami Workers Party and National Party.

The Students Action Committee president Shabnam Buneri said while talking to TNN that they staged the rally to express solidarity with those students who are making efforts for restoration of students union. He said the students must be allowed to hold elections which will help end the monopoly system of certain region. He said students will never accept the privatisation of the state-run educational institutions.

Shabnam Buneri said it is the responsibility of the government to provide free of cost internet to every student, and it should be done without delay.

Another member of the Action Committee Baitab Buneri said restoration of students union will end the incidents of harassment at educational institutions. He said that currently the students have no permission to share their problems at any forum. He said the students union will provide a forum for harassment victims to place their complaints after which pressure will be build for action against people involved in such shameful acts.

“It will give the students rid of such professors who blackmail or harass female students in the name of managing their score in the exams,” he said.

Baitab Buneri said the government is again asking about online classes, but this facility is not available in Buner. He said students could not raise voice over vital issues of privatisation of educational institutions, harassment, high fee etc due to which their problems remain unresolved.

Awami Workers Party district leader Malka Khan said the whole society is growing without proper political awareness since the time the ban was imposed on students union. He said all problems of students can be resolved by lifting ban on students union.

Shabnam Buneri said the last year’s campaign for restoration of students union paid great dividends as certain ministers and other important government functionaries made statements in support of students’ demands. He said the students of Daggar College had also staged protest against increase in fee after which the decision was reversed.