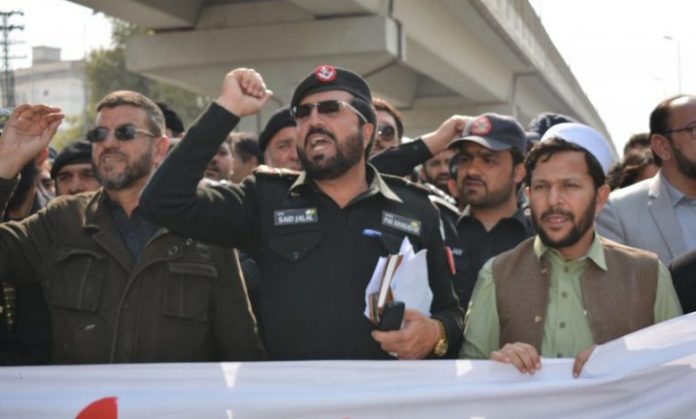 PESHAWAR: The economic murder of suspended Levies and Khassadar personnel from Khyber, Mohmand and Bajaur tribal districts must come to an end, says Khyber Union.

Khyber Union President Haji Mujeebur Rehman Afridi said in a statement here on Saturday that the suspended Levies and Khassadar personnel are compelled to hold protests because of the apathy of the government towards resolving their issue. He said the protest camp of suspended law enforcers from merged districts outside the Khyber Pakhtunkhwa Assembly is continuing for the last 74 days, but the rulers have no sympathy with them and they are not paying heed to the issue.

Mujeebur Rehman Afridi said KP Chief Minister Mehmood Khan, provincial ministers and other officials made several pledges with the Levies and Khassadars, but did not do anything practically. He demanded the government to restore the jobs of suspended Levies and Khassadar personnel without further delay so that their miseries come to an end. He also demanded that all the problems of the areas in merged districts affected due to militancy and military operations must be resolved on priority basis. He said people of merged districts are regularly holding protests due to non-resolution of their issues and problems. He said the government should focus on resolution of problems so that the practice of protests comes to an end.

The suspended personnel in Khyber and Mohmand districts had also announced boycott the polio vaccination campaigns till their restoration. Their representatives had said that the suspended Khassadar and Levies personnel are being subjected to discriminatory attitude. They said the higher officials are employing different delaying tactics to keep them out of the job. They said fake promises were being made with them for the last 11 years that they would be restored, but nothing has happened practically.

The suspended officials lamented that the elected representatives from their area are also powerless and they cannot anything for the suspended Levies and Khassadar personnel. They said the performance of the local representatives is restricted to statements only.