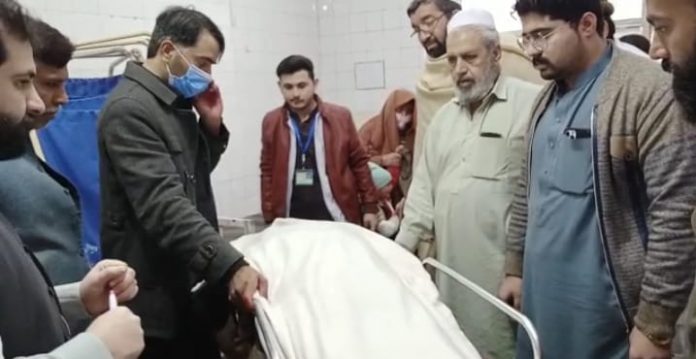 Rivals shot dead a man inside the Charsadda judicial complex on Monday.

Charsadda police spokesperson Safi Jan identified the slain as Seemab, a resident of Parang. He said that the deceased had arrived at the court’s premises for a hearing before a court, when his rival shot him dead.

Mr Jan said that some of the people accompanying the deceased managed to grab the attackers and handed them over to the police.

He said that the police will investigate the firing incident inside the court premises.

It is pertinent to mention that earlier June last year, three people were killed and two others were injured in a similar incident. Police had arrested the accused at the scene.

However, at the same time, security in charge of the courts was suspended along with four other cops. A month later, a man shot dead his ex-wife and injured his mother.

Shahryar, brother of the slain told police that they have old enmity with the MPA Shakeel Bashir Umerzai. He accused two brothers identified as Jalal and Niaz Ali of opening fire on them at the behest of the lawmaker. Mr Shahryar said that firing killed his brother. However, he added that he and his nephew escaped unhurt in the firing.

The firing caused panic at the court premises, where a large number of people had arrived for hearing in their cases.

Killings in court premises are fuelling fears among litigants and lawyers

Syed Raza Shah, a litigant who is appearing before court in a murder case, said that he feels insecure at court premises.

Mr Shah said that litigants undergo physical search on at least three places before entering the complex. “It is baffling how the attackers managed to carry the gun inside despite strict security,” Mr Shah said.

He said that police and lawyers were responsible for the breaches of the security. “Police turned blind eyes to the weapons while lawyers refuse to pass through security checks,” he said.

On the other hand, lawyers have blamed the police for security lapse.

Alamzeb Advocate, general secretary of the Charsadda District Bar Association said that people come to court in search of justice. “If the litigants are murdered at the seat of justice, then where they will go,” he said.

He said that some police personnel were suspended following previous such incidents. However, the same personnel were performing their duties in other places and no tangible action was taken against them.

Mr Alamzeb blamed the police investigators for letting the responsible cops off the hook in the investigations.

However, he said police  physically search any lawyer or their support staff, if they think it necessary.

He said that they have also asked the Peshawar High Court and relevant police officials for strict security at court premises.