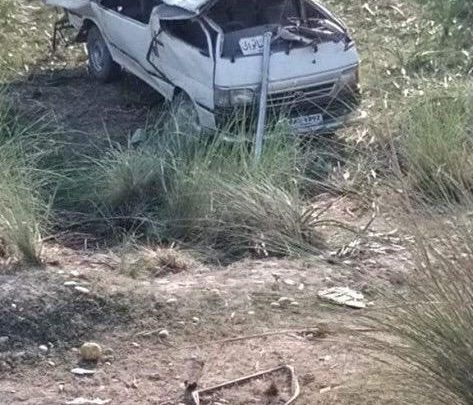 PESHAWAR: At least six people were killed in road accident in Bannu near Daud Khel Jinnah Barrage on Friday.

The injured were rushed to hospital in Bannu.

PESHAWAR: At least three people were killed – including two women – while three others injured in a blast in a passenger vehicle, near Zero point in Quetta city on Friday.

The Baluchistan police said that initially, they cannot say anything about the nature of the blast until the investigation is completed. However, local people said that the CNG cylinder blast of the vehicle exploded due to an increase in temperature.

The wounded were rushed to hospital in the provincial capital where one of the injured succumbed to his injuries. The Quetta Police said that a case has been registered and further investigation is underway.

PESHAWAR: After peace has been restored in tribal districts, thousands of local tourists have entered into the North Waziristan district on Friday on the third day of Eid. After Chitral, Malakand and Murre, Waziristan has also become a tourist attraction.

The sources have informed that the people from far-flung districts were the part of the tourist’s groups who entered the district on the third day of Eidul. However, the tourists complained that there are no proper facilities available for them while the district administration is totally ignorant of the issues.

There have also been long lines of vehicles due to unavailability of police and levies forces men to regulate traffic. However, the soldiers of Pakistan army have helped in clearing the roads. The district hospitals were on high alert to face any emergency situation.