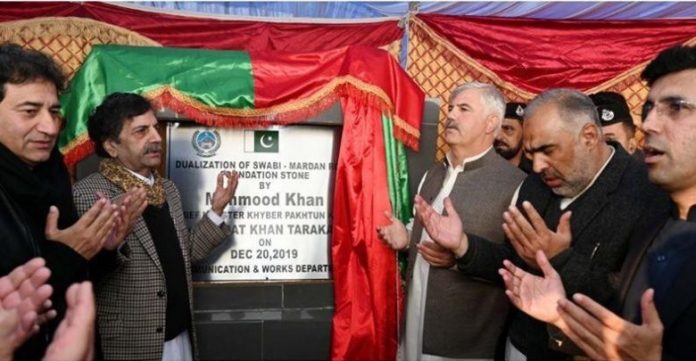 The 42-kilometre Swabi-Mardan road project has 11 flyovers and one underpass, which will also be linked to Motorway. Addressing a public gathering in Shewa Adda, the chief minister said the dualisation of Swabi-Mardan Road will cost Rs10 billion. He said the Pakistan Tehreek-e-Insaf (PTI) has deep roots in the masses and it will serve them. He said the people of KP for the first time gave mandate to the same party twice due to its performance. He said that in the 2030 general elections, the PTI will form government in the Centre and all provinces due to its performance.

Mehmood Khan said the PTI government took bold steps and introduced reforms in different departments, which are bearing fruit. He said people are benefiting from Sehat Insaf Cards, appointment of necessary staff at schools and hospitals, Independent Monitoring Unit (IMU) and other reforms. He said the previous reforms will be strengthened and efforts will be made to expand the Sehat Insaf Card programme to the whole province. He said the provincial government aims to provide this facility to every citizen through his/her identity card.

The chief minister said the government is appointing 400 more doctors in hospitals. He said reforms have been introduced in the health sector to ensure prince of doctors at hospitals in far off areas.

About tribal districts, Mehmood Khan said he has got a larger province to administer as compared to the previous governments after merger of erstwhile Fata with KP, which is a great challenge. He said that in this short period, the KP government arranged first-ever provincial elections in merged districts in a peaceful manner, provided free healthcare facility to every citizen, interest-free loans, extended courts to merged districts, merged 28,000 Khassadars in Police and introduced hundreds of other quick impact projects. He said Rs11 billion from the annual development programme have been provided to merged districts.

The chief minister said the provincial government will soon introduce a WhatsApp number for the citizens to register complaints about corruption and inform the government about problems.