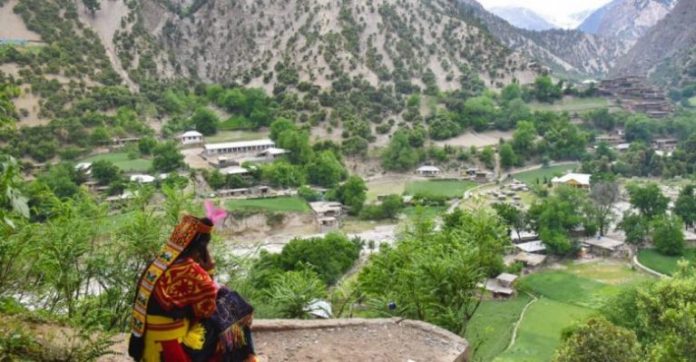 CHITRAL: Tourists thronged Chitral in large number during and after the Eid holidays and thoroughly enjoyed their trip and stay at the picturesque tourist resorts.

The whole Chitral district attracts a large number of tourists, but Kalash valley has a charm of its own. Tourists from different parts of the country visited Garam Chashma, Booni, Mastuj, Shandoor and Golan areas. Owner of a little shop in Bamboret valley of Kalash said he had sale of Rs40,000 in a single day.

Chitral Bazaar is still full of tourists who are taking keen interest in buying various local items. In the old PIA Chowk, Haji Abdul Hameed has a dry fruit shop for the last 40 years. Tourists come to this shop in large number to buy dry fruit. Bilal, one of the 12-member group of tourists who came from Taxila, said while talking to TNN that Chitral is a beautiful place. “Unfortunately, the roads of Chitral are not as good as its people,” he said.

Bilal said Chitral turned out to be more beautiful than their imagination. He said the people of Chitral are very kind, hospitable and welcoming and crime ratio is very low. He said the only problem in Chitral is the poor condition of roads.

Another tourist said Prime Minister Imran Khan’s claims about promotion of tourism are yet to be implemented. He said the road in Garam Chashma is in extremely dilapidated condition. He said the road leading to Shandoor polo ground, the highest polo ground in the world, is also in very poor shape. He expressed disappointment over poor state of the road leading to the highest polo ground which is greatest attraction for tourists from across the country and abroad. He said he had heard that the Tourism Corporation of KP had approved Rs40 million for Shandoor, but still the facilities for tourists are inadequate. He said if the money was spent on roads then its condition would have been better. He demanded the government to improve the condition of roads to facilitate the tourists.

The group of tourists told TNN that no one goes to Kalash second time because the condition of road is very bad. They said the road on either side of Lowari Tunnel is also in poor condition. They said motorcycle riding is not allowed through Lowari Tunnel and motorcyclist had to pay Rs200 to vehicles to carry their bikes across the tunnel.