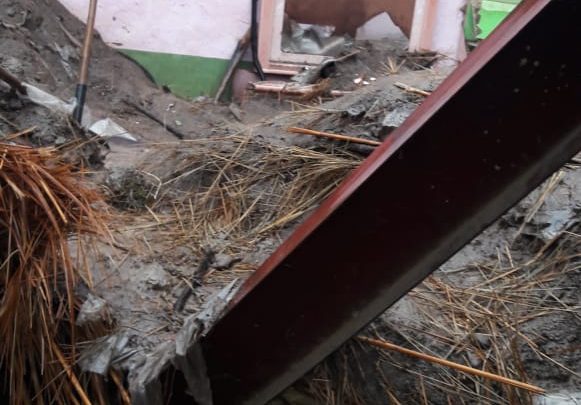 HANGU: Three persons, including a child, were killed when the roof of a house collapsed in Karbogha Sharif area on Monday morning on after heavy rains. Police officials informed the media persons that incident occurred at 5 am after heavy rain lashed the district When the roof of Zeenat Khan’s house collapsed due to which his wife Mehnaz Bibi, their 3-year-old Daughter Madina Bibi and 8-year-old niece Wafa Bibi trapped under the debris.

After the house collapsed the local of the area rushed toward the side to rescue the victim family, however, they couldn’t manage to rescue them alive.  They have retrieved the dead bodies from the debris and were taken to Doaba Hospital. Police said that after the incident was reported, they rushed teams to provide assistance to the unfortunate family.

It is pertinent to mention here that during the last month, six persons including three women, were killed due to rain-related incidents in Hangu districts.

In February, at least 14 people, including women and children, were killed and 13 others were injured in rain-related incidents in Khyber Pakhtunkhwa. According to the Provincial Disaster Management Authority seven children, three women and four men died in separate in parts of the Malakand and Kohat divisions. On March 04, inclement weather claimed lives of eight more people and caused injuries to 14 others in Khyber Pakhtunkhwa as rain continued to lash hilly and plain areas of the province.

On the other hand, the Pakistan Metrological department has predicted heavy rains during the next 24-hours throughout the province. The department while providing details of the yesterday rainfall said that Dera Ismail Khan received 13, Malam Jabba 12, Bannu  08, while two meters of rain has been predicted in Peshawar district. Malam Jaba has also received three-inch snowfall.