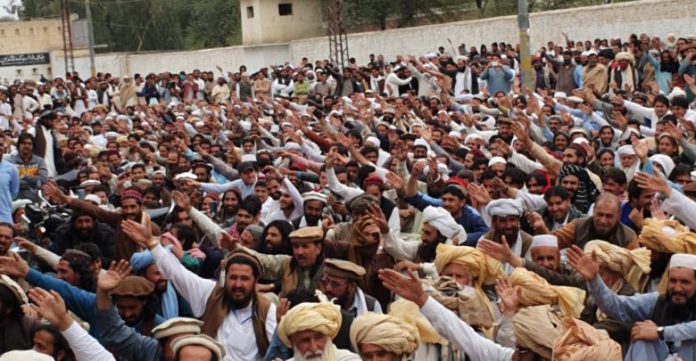 WANA: The participants of ‘Yao Maseed’ (United Mehsuds) sit-in from South Waziristan tribal district have decided to further toughen their stance after no interest shown by the government for resolution of their problems despite 40 days of protest.

The people of South Waziristan are staging a sit-in in Tank against no survey of damaged houses and properties and non-payment of compensation for the last 40 days. The protesters said the tribesmen will continue boycott of polio vaccination campaigns in South Waziristan, other tribal districts, settled districts of Khyber Pakhtunkhwa as well as in Karachi until their demands about the survey of damages and compensation are accepted.

The protesters said the people of Mehsud tribe are fully supporting them for their demands and they will also not vaccinate their children till the demands are accepted.

They also made it clear that the next time no talks will be held in any political compound or government office. They said if any government official wants to talk with them then he would have to come to the protest camp. Tribesmen use the threat of polio vaccination boycott from time to time to pursue their political demands.

Official sources in district administration South Waziristan and Provincial Disaster Management Authority (PDMA) termed the sit-in participants as group of Mafia who want to blackmail the government to accept their illegal demands. They said the estimated number of houses in the district stand at 27000 while the compensation have been given to 37000 owners of houses registered in survey.

The participants of the sit-in are mainly contractors and some locals who have registered their houses 8-10 times in various surveys and got compensation repeatedly for their damaged properties in connivance of corrupt officials, they alleged.

The government is committed to give relief only to the genuine and deserving people who have not received any financial assistance for their damaged houses,they said. The sources said so far 14 billion rupees have been distributed among the owners of damaged houses following the surveys were conducted in various areas of South Waziristan.

They made it clear that the administration is ready to hold talks with affected and deserving people and not with the cheaters and blackmailers who are using means tactics and announcing boycott of polio vaccination to pressurize government to accept their illegal demands.