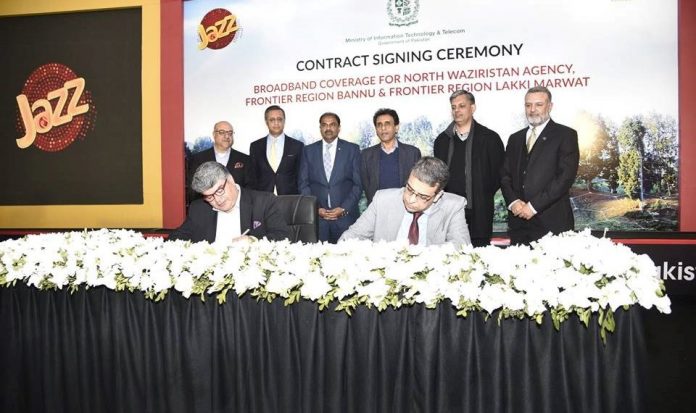 PESHAWAR: The federal government has signed a Rs258 million agreement with a private cellular operator for providing mobile and internet services in North Waziristan tribal district and frontier regions (FRs) of Bannu and Lakki Marwat.

The agreement has been signed with cellular operator Jazz for which the federal government has provided a subsidy of Rs198 million. The Universal Service Fund (USF) Chief Executive Officer Rizwan Mustafa Mir and Jazz Company Chief Corporate and Enterprise Officer Ali Naseer signed the agreement.

A ceremony in this regard was organised which was attended by Federal Minister for Information Technology and Telecommunication Dr Khalid Maqbool Siddiqui as chief guest. The minister raid in his address that the Ministry of Information Technology and Telecommunication has achieved enormous successes. He said the ministry will introduce such projects with the help of USF in the whole country and will create facilities for internet users.

Rizwan Mir in his address said the purpose of the agreement was to provide mobile and internet facility to the people of North Waziristan tribal district. He said the project of providing 3G and 4G internet in the area will be completed within two years. He said the government is now focussing on building infrastructure and providing facilities to the people of the tribal districts after improvement of law and order situation. He said development of infrastructure proves that the tribal districts are now moving towards development.

The signing of the agreement will serve as good news for the students and businessmen. However, they would like quick implementation of the project.